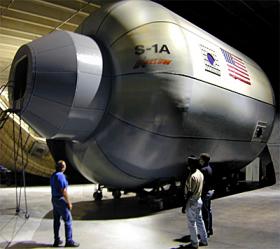 I’m starting to take a look at Bigelow Aerospace, a private space firm started by hotel entrepreneur Robert T. Bigelow. You may know Mr. Bigelow through his hotel chain, “Budget Suites of America.”

Bigelow Aerospace has been able to do something fairly unique. As a private company they have been able to put into orbit a prototypical, functional space station. Granted, Genesis 1 is just a 1/3 scale model of the modules that will eventually make up a real space tourist hotel, but it seems to be demonstrating that concept of an inflatable space station is valid.

Yes, it’s inflatable. Genesis 1, like future Bigelow Aerospace space station models, is designed to be delivered into orbit in a ‘packed’ form that will automatically inflate upon deployment into orbit. The technology seems to be valid because it depends on puncture resistant fabric.

Bigelow has offered to let Earthlings to include trinkets, mementos, or other knick knacks to be sent into space as ‘cargo’ of these space stations. Genesis 1 even has internal cameras that will allow you to watch this mess of trinkets whirl around the interior. Genesis II is due for launch in January 2007, and Bigelow is again offering to allow people to purchase space for their items.

This looks interesting, possibly even promising. Bigelow doesn’t know a thing about space, electronics, or computers, but he’s good at getting things organized and he’s willing to put his money where his mouth is. Maybe as a hotel owner he senses money as a hotel for space tourists. If he is successful then despite his lack of actual technical know-how he may become as famous as the Wright brothers.

I really want to like Mr. Bigelow, but he makes it very difficult.

Besides space exploration, Bigelow also believes in the paranormal, and in UFOs. Since he is the kind of guy who isn’t afraid to spend his money on what he believes, he founded the National Institute for Discovery Science as a way to study the paranormal and extraterrestrial. The NIDS has fallen on hard times lately, but Bigelow still seems determined to believe in alien visitors.

This so reminds me of Sir Isaac Newton, celebrated for his contributions to mathematics, optics and physics. His theories of gravity and motion are still required for any modern physics student. But at the same time, was a bit wacky. He believed in Alchemy, and wrote more on religion than he did on any of his famous scientific pursuits.

Mr. Bigelow, if he is lucky, may be someday remembered as an important contributor to space habitats. If he is unlucky he’ll be remembered as the kook who went to space to look for ET.