According to Wikipedia Dr. Sheldrake once taught biology at Cambridge University before moving to India and joining a Hindu hermitage with mystic Swami Dayananda. Afterwards he moved back to London and late last year he was appointed to the Perrott-Warwick Scholarship for psychical research and parapsychology by the otherwise excellent Trinity College of Cambridge. Oddly enough, searching the Trinity College website turns up no mention of Dr. Sheldrake or the Perrott-Warwick scholarship, or any mention of psychical or parapsychological research. 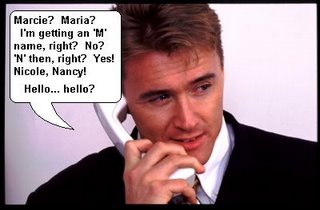 Dr. Sheldrake is lately in the news for his announcement about Telephone Telepathy at the annual meeting of the British Association for the Advancement of Science. He presented to attendants at this meeting his evidence that people know who is calling them when the phone rings. According to the Yahoo news article:

Each person in the trials was asked to give researchers names and phone numbers of four relatives or friends. These were then called at random and told to ring the subject who had to identify the caller before answering the phone.
“The hit rate was 45 percent, well above the 25 percent you would have expected,”
…
However, his sample was small on both trials — just 63 people for the controlled telephone experiment and 50 for the email — and only four subjects were actually filmed in the phone study and five in the email, prompting some skepticism.
Undeterred, Sheldrake — who believes in the interconnectedness of all minds within a social grouping — said that he was extending his experiments to see if the phenomenon also worked for mobile phone text messages.

Notice that Dr. Sheldrake didn’t address the problem of a too small sample size for his experiment, and instead immediately widened the experiment to include different tests. This is not a sign of good science! This isn’t the first time Dr. Sheldrake has been accused of making unwarranted claims based on improper methodology. CSICOP took Dr. Sheldrake to task and debunked his Psychic Staring Effect experiment – where he claimed to show that people could tell, better than random chance, when someone was staring at them.

Dr. Sheldrake also wrote a book called, “Dogs That Know When Their Owners Are Coming Home: And Other Unexplained Powers of Animals” (Amazon link) In this book he attempts to show that dogs can somehow psychically ‘tell’ when their owners are coming home. The methodology described by Dr. Sheldrake shows that he didn’t even attempt to create a ‘double blind’ experiment, where neither owners, dogs, nor observers knew when the owner was coming home. Instead he allowed the owners of these dogs to record the observations of their pets. He again used a very small sample size.

Dr. Sheldrake meets several of the seven warning signs of bogus science published by Dr. Robert Park. (I quoted this list before in my Steorn blog entry.)

Dr. Sheldrake does seem to consider himself somewhat of a skeptic, and is published at the Skeptical Investigations website. This isn’t really unusual since the website is actually registered to Dr. Sheldrake. According to Dr. Robert Carroll, author of Skeptic’s Dictionary, Skeptical Investigations only seems skeptical about skeptics who don’t agree with the authors on their website. Authors on this website, according to Dr. Carroll, believe that science should be redefined so that it includes the paranormal and the supernatural.

What I find most interesting about Dr. Sheldrake’s supposed skepticism is his refusal to cooperate with noted skeptic James Randi in Randi’s Million Dollar Challenge. Instead of cooperation, Dr. Sheldrake has instead decided to belittle Mr. Randi, and has in Randi’s words,

… expressed his fear about associating serious scientific research with a reward of this sort. Well, it’s hardly unusual for a monetary prize to be offered to the first person to demonstrate some phenomenon or solve some problem in science. Does the name Alfred Nobel sound familiar?

I’ve got news for Dr. Sheldrake, I actually DO know who is calling me on my cell phone almost every time it rings. My success rate approaches 90 percent. It’s called ‘Caller ID’, which is based on engineering and technology, which is in turn based upon science.