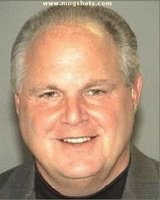 I was thinking of talking about Rush Limbaugh’s despicable treatment of Michael J. Fox, and his half-assed non-apology. I won’t say much because there are already way too many bloggers beating Rush’s dead horse with multiple instruments. Go see what my sister has to say about him.

I will say two things about Rush. First, he has painted Fox as evil, and therefore a democrat. Never mind that Fox has created a political ad for Arlen Specter, a Republican who supports stem cell research. In Rush’s pea-sized brain his logic goes: Fox = bad, Democrat = bad. Therefore Fox = Democrat.

Second, why does Rush carry any sort of authority with the Republican right anymore? College dropout, he escaped the draft due to a pilonidal cyst that made sitting too painful. (So as a conservative talk show host, he doesn’t sit??). Divorced three times, no kids, Rush is supposed to be an expert on family values. He went deaf, and took the admiration and support of his fans as his humble due – and then we all found out about his OxyCotin addiction and that it could easily have caused his deafness. Speaking of addiction to illegally obtained prescription drugs, isn’t Rush the guy who said,

Then he was detained while returning from the Dominican Republic with a bottle of Viagra in his luggage prescribed in someone else’s name. Yes, I understand that was on purpose so it wouldn’t make a sensation. Still, what is an unmarried man doing taking Viagra to a country known as one of the tops in sex tourism? I hope Rush has rethought his position on condoms and used them while he was there.

Rush admires Dixicrat Strom Thurmond’s politics, believes that Gay rights are ‘special rights’. He believes that he has the education to dispute global warming and the depletion of the ozone layer. And he has no problem with mocking his enemies, while at the same time stressing the importance of religious faith in Conservative values.

I’ve got to say, anyone who believes that there is anything admirable, let alone ethical, about Rush is in my opinion a Blathering Idiot.