I just saw a news article about what should happen when you mix politics with your religion – you get sued and have to cough up a little cash.

Jacksonville Florida paid over a hundred grand to fund the city’s “Day of Prayer”. Unfortunately they funded the day of Christian prayer, and not much else. They were rightly attacked by the American Atheists for playing favorites with their constituents and the City was forced to write a letter to the American Atheists that said they will think twice before doing such a stupid thing again. Oh, and they had to pay $5,000 in legal fees.

The city got its hand slapped, and is completely (to use a Christian term) ‘unrepentant’ for their actions. From the Times-Union article:

A settlement reached Friday requires the city to write New Jersey-based American Atheists Inc. a letter saying it did not intend to violate the First Amendment and will warn department heads against financing programs that “foster excessive entanglement with religion.”

“I have no regrets – it was time well spent and money well spent,” Peyton said about the Aug. 12 rally.

However, Peyton said the city will do a better job of consulting municipal attorneys “to make sure we don’t violate the separation of church and state.”

Chief Deputy General Counsel Cindy Laquidara said the settlement is not an admission the city violated the Constitution in financing the rally. It simply ends a potentially costly federal lawsuit filed by American Atheists shortly after the event, she said.

There is a lot of short-sighted arrogance built into the Christian Nationalistic worldview. When this group is on top of the pile, they never believe that they could become a minority at some point in the future. It was a nasty surprise for the Republicans to suddenly end up a minority in the House and Senate – and I’m sure they are regretting rebuffing Nancy Pelosi’s “Minority Bill of Rights” that she submitted in 2004. 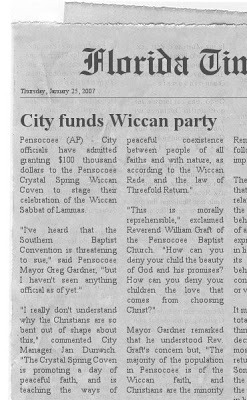 Can you imagine the headlines that would spring up across America if the religious roles were reversed? Imagine a small city somewhere in America where the religious demographic majority consisted of a traditional minority, Wiccan for example.

If a mostly Wiccan city, with Wiccan city leaders decided to act as Christians leaders currently act, the holiday season would certainly look a little different. Goodbye Nativity scene – but hey, the Christmas tree is still there. (And probably alive too – planted in a nice pot with plenty of Miracle-Gro and water.)

Christians across the rest of the United States would probably freak out, and start pouring money and people into this small town to try to get them to change their “evil” ways. They would claim Wiccan discrimination – which is a pretty ludicrous claim to anyone who has actually read the Wiccan Rede.

Wiccans say that both the good and evil that we create in the world will be returned to us threefold. If only this were true! Perhaps then Christians would reap the rewards of their own egotism. Instead Christians easily get away with treating minority religions as less than equal. And if an Atheist or Jew or Wiccan were to ask for equal treatment under the law the standard retort is, “This is a Christian Nation, you’re welcome to leave.”

Minority religions are important to the United States. I’ve said it about Atheism, but it is widely true to other minority religions. The way that good Christians treat “the least of these” shows their true morality.