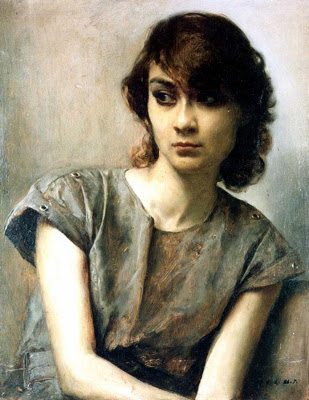 It is somewhat difficult to find good digital images of Yuqi Wang’s artwork online, but this is understandable. As a Living Master he still retains copyright to the images he has created, and has limited access to these images. His work is in demand, and he deserves to be compensated for his efforts.

But Mr. Wang has been gracious enough to allow us to see high quality images of some of his best pieces, through the Art Renewal Center.

As you could guess, gazing at this painting makes me dream up awkward scenarios so I can chuckle about them.

Perhaps Yuqi Wang’s more famous painting is “Girl in Summer” – which is cheerfully bright and elegantly somber. It is beautiful with fine details. You can see more of Mr. Wang’s works on his own web site, on the Art Renewal web site, or at “The Painter’s Keys” web site.

Yuqi Wang was trained in China and the US and is now based in New York. Among others, he is a member of The American Society of Portrait Artists, The Portrait Society of America and The Oil Painter Association of China and has exhibited extensively across China and America. His work hangs in public collections in China and the collection of the Japanese Royal Family. The influence of Rossetti and Burne-Jones is unmistakable, and in the tradition of the Pre-Raphaelites Yuqi manages to create work which is as sensitive as it is powerful.

“What draws me, as an artist, to put brush to canvas is at once both public and private. The world I reveal is a blend of both the ‘Occident’ and the ‘Orient’; my passion for both Classic European portraiture and the Pre-Raphaelite movement is gently kissed by my Chinese heritage. I find the classic styles to be timeless, with a warmth and honesty not offered any more with modern movements.”