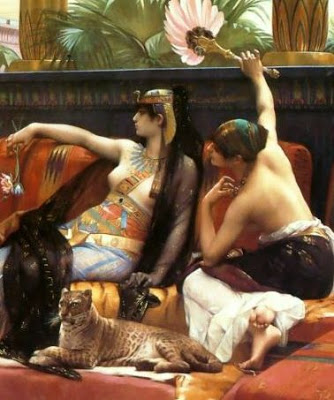 History and allegory have always been popular subjects for painters. It seems that during those times when expression was restricted to what was deemed “moral” painters who wished to paint nudes were often able to do so by associating them with a religious allegory, or by referencing a historical figure. In this context they could equate “nude” with “purity” and reduce their risk of incarceration or worse.

Historical paintings were often officially sanctioned because they were valued as a method of instruction. Incidentally, government endorsement was worth a great deal to the painter. I’m sure that at least a few lesser painters saw this as a gravy train, and tried to ingratiate themselves to their governments through works that embellished loved figures, or denigrated hated figures. To take liberties with a Winston Churchill quote, “History is painted by the victors.”

As I remarked in my last atelier entry, Jules Lefebvre made his name with the allegory of “Truth”. William Bouguereau also painted allegorical and historical paintings – “The Flagellation of Our Lord Jesus Christ” which I think is probably his best religious historical painting.

By the late 1800s art lovers in France were becoming jaded with history paintings. I can imagine why! The Salon de Paris, which held exhibitions twice a year, was picky about the artists who could exhibit their works. This led to frustrated artists who created splinter art exhibitions for styles such as Impressionism (Salon des Refusés), and for traditional, conservative artists (Salon du Champs de Mars). Smaller exhibitions were also prevalent as other groups formed.

So by the late 1800s it must have seemed like art exhibitions were held every other week in France. And historical and allegorical paintings were in all of these exhibitions, often painted by artists who tried to play the system with historical art in order to make money. Connoisseurs of fine art took to calling historical paintings, “Firemen Art” (L’art pompier) as a derisive label – the label came from the Greek style helmets worn in the paintings, which looked similar to the horse-tail helmets that were worn by French firemen. The name was later used by 20th century critics to sneer at all such work, regardless of the quality of the artist.

The painting I’m displaying today is a historical painting that may have been dismissed at one time as L’art pompier. The painting is Alexandre Cabanel’s “Cleopatra Testing Poisons on Condemned Prisoners” As usual, this is a cropped detail – click on the image to see it in full.

I only like a few of Cabanel’s paintings; sometimes the faces in his paintings have too much of a Renaissance style for my tastes. He also wasn’t as interested in painting “beauty” as Bouguereau, so seems to me that some of his best work is of mediocre people. Even so he was very skilled, and he is an important artist to know because he taught painting, and through his teaching he influenced hundreds of pupils who did paint “beauty”. The works of Cabanel’s students had a huge impact on the French “Beautiful Era” (Belle Époque).

As for this particular history painting, stories and history about Cleopatra always include accounts of poison. One of Cleopatra’s older sisters tried to poison her; her younger brother (and co-ruler of Egypt) died mysteriously – probably poisoned – leaving Cleopatra in charge; (although she did appoint her son from Julies Caesar to be her male co-ruler.) Cleopatra was more than somewhat familiar with poison, and Cabanel’s painting illustrates a possible method that she may have used to increase her knowledge. This painting shows a coldly interested Cleopatra watching as various poisons are tried on prisoners condemned to death.

She’s beautiful, and she’s as deadly as the asp that was said to kill her. I think Cabanel shows this very well.