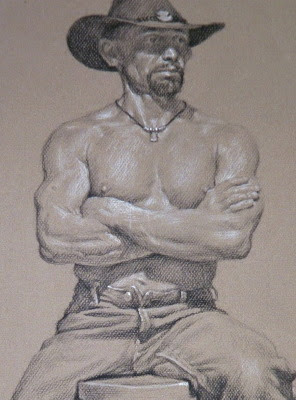 Today I would like to tell you a little bit about modern ateliers. I’ve been showing a lot of paintings in my blog, and for the most part these paintings are often over a hundred years old. I have mentioned modern “Living Masters” before, but perhaps I haven’t explained very well that traditional techniques are still being taught to students today.

Also in today’s atelier I’m highlighting the “Living Master”, David Hardy. And in respect for Mr. Hardy, I’m keeping the images that I display of his works cropped so as not to unduly intrude on his copyright. Mr. Hardy’s biography can be found on his personal web site and a little more can be found on the Art Renewal Center’s web site, and other sites, so I’ll only hit the highlights here. (Link1, Link2)

David Hardy was born in 1929 in Dallas Texas. His grandmother, also an artist, became his first teacher at the age of 11. From the ages of 19 to 22 he was tutored by a portrait painter in Dallas Texas, (from the Ramon Froman School of Art). He then enrolled in Chicago’s American Academy of Fine Art. Mr. Hardy moved to New York when he was 26 years old, and enrolled in the Art Student’s League of New York. He also studied at the New York School of Visual Arts.

This must have been a frustrating time to be a painter of romantic realism! Critics were all raving about “modern” art, and people were throwing, spilling and wiping paint at canvas and being hailed as great artists for doing so.

From this point, biographies about David Hardy get a bit fuzzy. He must have worked for a time as a draftsman, before the advent of Computer Aided Design. His work and collaboration was included in the textbook “A Guide to Drawing”, Fifth Edition, by Mendelowitz and Wakeham, which is used as the text for several university level art departments. His works were also exhibited at the John Pence Gallery, among others.

At some point, Hardy opened up his own Atelier, the Atelier School of Classical Realism, (ASCR) located in the Temescal area of Oakland, California. He was later joined by artist Rob Anderson, who also instructs at ASCR.

ASCR offers courses in drawing, figure drawing and anatomy, Old Master Drawing and Painting Techniques, certificate programs and several workshops that deal with narrow topics in style and technique. Students as ASCR learn about art as if they were learning about a foreign, “visual” language. In order to “speak” in this language – in other words, in order to create works of art – the student must first learn grammar, syntax, and vocabulary. A student must first acquire a technical understanding of anatomy, drawing, and of the materials that he or she uses first, so that the creation of art is done purposefully and not by happy accident. I’m showing two of Mr. Hardy’s works here today. Clicking on them will take you to the works in full. I’m not showing paintings this time, but drawings. This is because I find these two particular works to be especially striking – and because I am trying to emphasize that technical skill is a basic necessity to become a great painter. If an artist lacks the training and practice to acquire this sort of skill, then his or her best paintings will be lacking, or will be mere accidents.

The first is the drawing “Koyote”. The media used isn’t stated, but it looks like charcoal and chalk. The second drawing is titled, “Rori: The Man and the Myth”, drawn with charcoal and chalk on French paper. You can also follow this link to view another version of “Rori”. These drawings show that Hardy well understands human anatomy, and demonstrates his expertise.

Oh, and to one of my female readers, who I said I wouldn’t name, my apologies for always showing the female figure, I hope these two male examples make up for that lack, at least a little.

Modern Ateliers
So, perhaps you would like to paint like a master. What do you need to do? Hardy started at the age of 11, so is it already too late for you? Don’t believe it! Drawing is a learned skill, and good artists mix the learning of technique with the practice of actually drawing. The best thing to do is to start drawing, and not just drawing, but learning about drawing too. An artist who can present a portfolio of work upon application to an Atelier is more favorably regarded than a rank newcomer because it demonstrates determination. And there are more than a few Ateliers available to choose from, but you may need to relocate.

It is possible to have a job while studying at an Atelier, but I wouldn’t recommend it. Some people can pull it off, and some can’t. Think of this like a college or university, the students who live on or near the campus and can afford to devote all their time to school are the ones who graduate the quickest. But who has that kind of money? Mom and Dad surely won’t put you through an expensive Atelier, they would much rather you chose something more “practical”.

Scholarships are available from the Art Renewal Center, (ARC) but require that you demonstrate some skill and commitment. This means that you should already be enrolled at an ARC approved Atelier, and then you must compete in the yearly contest for available scholarship money. Other such scholarships probably exist, but I haven’t looked for them.

The traditional method of support while studying is through patronage. It is up to the student to discover those wealthy people who might wish to send them to an Atelier. Although patrons are rare these days as opposed to the Victorian age, the first step in finding a patron is still the same. You must show that you have dedication and talent. And talent is learned through hard work and practice. This means you need to draw.

Authors often say in advice to new writers that to become a successful author, you must first write a million words while striving to create readable sentences. Only afterwards will you understand how to craft a sentence, a paragraph, a story in a believable way that enchants your audience. To become an artist, you must draw, practice, and draw, learn the techniques of drawing and draw, learn about anatomy and perspective, and draw, draw, draw.