Just a quick update. I’m still on Hiatus, and will be possibly for the next week or two. Keep checking back here though, and I’ll try to keep everyone in the loop. I’ll try to post something every week.

The title of this post is a George Carlin reference. In Carlin’s comedy routine on cats he showed that no matter what sort of stupid situation a cat gets himself into, the cat will always extract himself from that situation with the maximum amount of dignity.

Even when running into a door at full tilt a cat will strut away with a, “What? I meant to do that!” attitude. According to Carlin the cat will calmly strut off to a location behind the sofa to recover, to hold his head and give a heartfelt, “Oh fucking me-OW!” 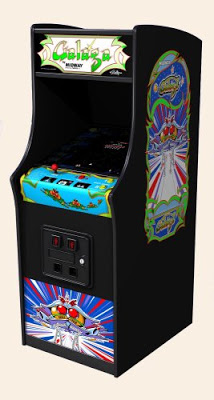 Yesterday I took a break from my own worries, and stopped by the local shopping mall to pick up a pair of pants and a new shirt. On my way through the mall I found a video arcade and stepped in to look around.

First, let me note that video games to me are like booze to an alcoholic. In order to stay sober, I need to abstain. Next I’ll admit that when I was in high school and in my first two semesters of college, I was not able to stay away from video games. (That may also have some bearing on why I suddenly joined the Air Force after only two semesters of college! But it all came out okay – I made up for it later.)

Most of the video games of my youth have disappeared. Joust, Defender, Tempest, Q-Bert, Centipede. My favorites were Star Wars, Discs of Tron, and Galaga. I could play my favorites for an hour or (much) more on a single quarter.

The video arcade at the mall mostly contained NAOMI junk games, Dance Revolution, ticket games and such. But prominently set in the center of the room in front of the door was a Galaga console.

So once again I fell off the wagon.

The console was well restored – the video was bright and sharp and the joystick was responsive with no slop to it. Soon I was hitting level 23 and had gathered a crowd of people who were a quarter of my age, who were all born at least a decade after this game first hit the market. Since I don’t remember all the tricks that I used to use I’ve lost some of the reflexes, so I finally lost my last ship somewhere around level 30.

I was absurdly pleased that I’d managed to impress a bunch of 10 and 12 year olds, and in that frame of mind – and a bit dazzled from the screen – I decided to leave before I was sucked into playing again.

I turned away, and took the 5 steps toward the glass-fronted doorway that led to the mall… and missed the door. Instead I walked forehead-first into the (very clean) glass wall right next to the door – the resulting musical bell-like ‘Thunk!’ was almost enough to drown out the sound of my teeth clacking together from the force of the collision.

It’s bad enough to be laughed at openly by a crowd of pre-teens. What’s worse is to watch a mall full of adult strangers who are trying (and failing) to cover their snickering enough to seem concerned for my welfare.

Dazed, I gathered together my shredded dignity all the while thinking of George Carlin’s cats. My calm smile had a, “What? I meant to do that!” quality to it. Calmly I walked out of the mall and out to my car where I sat holding my head saying “Oh fucking me-OW!”

I still have a small knot on my forehead this morning. Dignity? What dignity?