I can’t blame my friend Scott for tagging me with the “8 random facts” meme. It’s actually pretty fun for being a type of mind virus, and I’ve enjoyed reading other people’s replies to it. The problem is that I find various forms of chain email distasteful, and this meme is very close to being the same thing. So I’m in a quandary – should I perpetuate this meme because it is fun, or should I ignore it because it feels like a form of email virus?

The solution that I’ve decided on is that I’ll give my own eight random facts, but that I won’t tag anyone else with this meme. However, if you want to consider yourself tagged by me, go right ahead and state that you’ve been tagged in my comments. Perhaps this will reduce the virulence of my strain of this meme, but really I don’t care because sooner or later the world of blogging will become tired of it (or inoculated to it?)

You’re welcome to “read more” and find my eight random answers, or you can skip it entirely and go do something more pressing, like waxing the fridge or defrosting your oven. 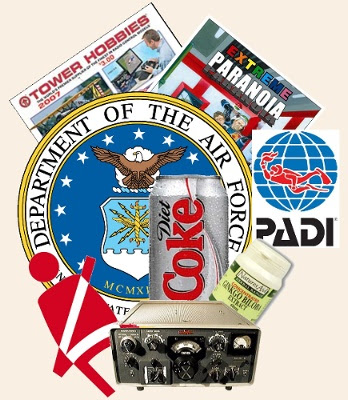 I used my Amateur Radio experience while stationed on Kadena AB in Okinawa Japan to re-activate the Military Affiliated Radio Service (MARS) station.

I still have all my training manuals, materials and schematics. I have a framed schematic on my wall of my favorite radio system that I was tasked to maintain, the KWM-2A HF transceiver.

I’ve never SCUBA dived since then and I miss it terribly, but I know the California coastal waters will never be as beautiful as Okinawa’s, so I haven’t tried to get back into SCUBA.

I don’t even like it on a blazing hot day when I’m parched – it still tastes to me what I’d imagine mule piss to taste like. I think people who claim to like beer are part of a “Beer Conspiracy” and are trying to get me to drink it as part of an elaborate practical joke. I do enjoy hard liquor but I stay away from it because it scares me how much I like it. (I’m part Choctaw, and my grandfather was alcoholic, so I try to stay away from the firewater.)

These days I occasionally drink wine, but I haven’t bothered to learn enough about it to be able to consistently find quality wine that I enjoy.

Anyway, since a glass of any sort of alcohol makes the world start to slowly spin around me, I find it easier to just tell people that I’m mostly a tea-totaler. When I go out, I drink Diet Coke or iced tea (brewed please – not from a fountain!)

However, I had to program my home phone number into my cell phone because I can’t remember it, and when I get a new PIN for my ATM, I have to program it into my wristwatch database for at least 3 months, until I get it memorized.

I forget names almost instantly, and I require a couple of days of constant self-reminders before I remember a person’s name.

So I do things like shred all documents with my name or other information on them, sit with my back to walls, etc. The PIN programmed into my watch from item 6 is off by a couple of digits in a pattern that is familiar to me.

I understand why I’m paranoid – I had an emotionally and verbally abusive stepfather who made me defensive. A few of my high school friends liked that “button” in me and would sneak up behind me and yell to see my startle reflex. The paranoia was reinforced in other ways by my father often stressing that I “be prepared” and by the Air Force’s constant admonishments to practice proper OPSEC and COMSEC.

And now I often find myself in a situation or location that makes me uncomfortable until I’m able to identify why – which usually means locating the exits or making sure the doors are locked, or identifying and keeping track of those people that set off an “alarm” in me.

I’ve applied this 80 percent rule to my hobbies. And I have way too many hobbies (and most are too expensive!) I’ve been forced to drop the majority of them due to limitations on time, finances and life in general. But merely having them, and using this 80 percent rule, has made me at least knowledgeable on many subjects and more than knowledgeable on a few subjects – for example electronics was a hobby that I turned into my profession.

My current hobbies include Amateur Radio, woodworking, blogging, art appreciation and drawing, playing around with robotics, studying history, cooking, Toastmasters, and of course learning more about pseudoscience and various mythologies.

Hobbies that I’ve had in the past include SCUBA, gardening, raising critters (everything from salt water aquariums to birds, rodents, snakes, bugs and crustaceans. I’m not mentioning my dogs and cats – they’re family.) Linguistics (I’m dangerous in Korean, and fascinated with the Choctaw language), herbalism, outdoor survival training, target shooting and hunting, the Society for Creative Anachronism, (where I apprenticed as a squire and a herbalist and made chain mail.) And of course role play gaming.

There are many others; odds are that I know enough about a broad subject to give an impromptu 3 to 5 minute talk on it. (I do have broad areas where I lack any knowledge – don’t ask me to talk about sports!) And I’m not done yet, I really want to learn about machining and welding, and am planning on purchasing a welding set when the time is right. I’d also like to learn about casting my own parts in aluminum and injection plastic, and maybe even steel – but that has to wait until I have a backyard to work in.

Okay, if you want to be tagged by me, consider yourself to be tagged. Just leave me a comment here telling me that you’ve been tagged and carry on.

It’s been fun writing this, and like I said, I enjoyed reading this meme on other blogs – but it sort of goes against my grain to encourage this sort of folderol.

Even if it was fun.