I’ve always enjoyed playing around with different sorts of symbolism. I don’t know if I’m any good at creating new symbols, but I do have fun with it.

So when I saw the request for the creation of a new symbol for Atheism on PZ Myers’s Pharyngula blog I thought, “I’ll bet I could design something that would work!” And of course I promptly forgot about it. But later, after the contest ended, I kept thinking of what might make a good symbol that represented non-belief, ration thought, and critical skepticism. Since then, the call has gone out again with results that I’ve found less than satisfying.

I think a good symbol should easily be silk-screened or stenciled in a single color, or easily doodled, or turned into recognizable jewelery. I wanted a symbol that would be easy to remember, that would be difficult to mistake for something else. A symbol that would still be recognizable even if the proportions were a bit off. So I started looking at other symbols for inspiration. Of course I’ve found that existing symbols are either complex or trademarked.

The one symbol that kept reappearing again and again in my reading was the Pansy flower. It has seemed like the most acceptable for many non-believers due to the depth of history behind it. The Pansy’s name comes from the French word pensée, which means “Thought”, and it was so named because the face of the flower resembles a person nodding deep in thought. The Pansy has been identified with thought for a long time and first appeared as a Freethought symbol late in the 1800’s.

In 1885 the famous orator Colonel Robert Green Ingersoll was elected president of the American Secular Union. This organization was allied with the Freethought Federation, and dedicated to promoting the separation of Church and State in the United States. These were the first groups to start using the Pansy flower as a symbol, and that tradition continues today with the Freedom from Religion Foundation, who also uses the Pansy as a symbol of Freethought and as a reminder of our natural, and only, world.

The modern cultivated Pansy has experienced almost 200 years of breeding to make it hardy, give a wider variety of colors, and to increase its size. Because of this I think is an excellent symbol to apply toward non-believers, Secular Humanists, Skeptics, Freethinkers and others who promote the methods of science and rational, critical thought. I’ve seen many Atheistic symbols based upon the tools of science – but I think a symbol based upon the results of science is more appropriate.

The Pansy flower would be a perfect symbol if only it were easier to draw!

I was inspired by my copy of the Boy Scout Handbook where I was reminded that the Fleur-de-lis symbol is a part of the Scout uniform. I find the source of my inspiration to be somewhat ironic.

“Fleur de lis” is literally translated as “Flower of the Lilly” and is thought to be based upon Iris pseudacorus, which I’m also showing here. You can see that the complex, hard to draw shape of this flower becomes an easily recognized, fairly easy to draw heraldic symbol. I thought I could do the same thing with the Pansy Flower. 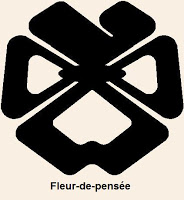 And this is what I’ve come up with – a simple symbol that represents the 5 petals of the Pansy, with associated flash on the three lower petals, all joined at the throat of the flower. Since it is based upon simple triangles and rectangles with rounded corners, it is easier to draw than the FFRF’s pansy, and it is distinct from it. It is a Fleur-de-pensée, a “flower of thought”.

By itself, or inside of a circular hoop, it would make great jewelery. It is easy to recreate freehand – the proportions are not as critical as, say, the Biohazard symbol or the circle of the IPU. It can be colored, and other symbols can be overlaid on top of it or embedded inside of it in much the same way that different organizations use the Fleur-de-lis.

Since I’ve created this Fleur-de-pensée, I could easily copyright it, trademark it and market it if I so wished, but I think that is counter productive. So I’m releasing this symbol to the public domain, free for anyone to use, with only one restriction.

The only requirement that I make is what this symbol represents. As long as anyone uses a symbol that is recognizably based upon or derived from the Fleur-de-pensée, it will always represent scientific, skeptical and rational inquiry into our natural world, without the need to resort to the supernatural. It also indicates a willingness to explore moral philosophies that originate with humans and benefit all humanity while respecting individual human rights.

And that’s it. Maybe this symbol will be a flop – non-believers are notorious for refusing to herd together under a single banner, nor do I expect them to do so. But maybe this symbol will succeed in the marketplace of successful memes where others have not. Go ahead, put the symbol on your own products and sell them. Embed the symbol into your personal symbol, or embed your symbol into this. Color it, use it in Heraldry, play with it. And although I’d appreciate a mention that I invented this symbol, I won’t require it. (I’ll insert my completely optional hint for swag here!)

And it won’t matter to me a bit if you don’t “play nice” with the Fleur-de-pensée, or if you re-define it to mean something else. The Internet won’t forget where it came from, or that this symbol acknowledges that a belief in the supernatural is unnecessary to rational thought, scientific progress, and human morality.

Have fun with it!

—
17 Aug 07 Update: I’ve recreated the symbol in Scalable Vector Graphics format and have saved copies in SVG and Adobe PDF. You can find them in this post.