This evening while walking through Wal-Mart I passed by the seasonal aisle (currently set to “Christmas”) and Jesus Christ caught my eye!

He was 11.5 inches tall, with long, light brown plastic-formed hair, fair skin and baby blue eyes. He was in a tan box with a clear plastic front. The box was labeled “Messengers of Faith” and said that I could make plastic Jesus talk if I only pressed the easily accessible button embedded on his back, through the hole in the cardboard packaging.

There was a whole shelf full of action figures in the “Messengers of Faith” lineup: Jesus, Esther, Paul, Mary and Moses. They’re manufactured by the company One2Believe, who also sells the “Tales of Glory Figurine Sets” and the “Spirit Warriors” action figures.

According to One2Believe founder, David Socha, these action figures are designed to offer a more Christian choice against the “spawns of Satan” toys that are already on Wal-Mart’s shelves. Satanic toys like Spiderman, or Darth Vader.

From what I could see, the “Tales of Glory” figures are a sort of “Bible Babies” theme, ripped off from a similar tradition of Jim Henson’s “Muppet Babies” except less interesting. The “Spirit Warriors” only include Samson and Goliath, who were somewhat taller than the “Messengers of Faith” set, and with muscles that Arnold Schwarzenegger could never flex on his best day.

As I examined these figures, I was immediately struck by their poor quality. I grew up with the original G I Joe figures, the fully positional action figures with fuzzy buzz cuts and Kung Fu Grip ™. The “Messenger of Faith” Jesus doesn’t come close to being nearly as cool as Joe. He isn’t as flexible, his head and neck mismatch the color of his torso, his hair is plastic and he’s not as positionable. However, his pop-in head and neck assembly can be rotated 360 degrees if you ever want to reenact “The Exorcist”.

The package clearly said that Jesus talks. Since I’m a real geek when it comes to toys and gadgets I had to play with it. So I picked the plastic Jesus in his box off the shelf and pressed the “Try Me” button in the middle of his back.

And the plastic Jesus called my name in a clear and foreboding voice:

I was so startled that I almost dropped Jesus on his head! It would have served him right for surprising me like that! Wow! Talk about a cardio workout!

But, as I said, I’m a geek. And I’m a Skeptic too. So of course, instead of instantly believing that I was receiving a sign from God through a plastic, talking “action figure”, I waited for my heart rate to normalize, then I tentatively pressed the button in Jesus’s back again.

And the plastic Jesus said, in a much meeker, quieter tone of voice, “Mark?”

What? That came out as a sort of whimper… maybe Jesus was actually afraid of me? Maybe Atheists scare him? Maybe Wal-Mart weakened him?

Ha! “You have no power here!” Emboldened, I pushed the button in his back again.

And the plastic Jesus said, in a whimpering voice, “mmaaaarrr – ip!”

The last part of his vocalization faded into electronic submission that was almost, but not quite, reminiscent of Andre Delambre’s voice calling “Help me, Help me!” while trapped in a web in the 1958 movie classic “The Fly”.

Aha! This has to be battery related! I tossed the depleted Jesus back on the shelf and pulled out the hopefully more fully charged Jesus that was standing behind him.

Yep! When I pressed the button the second plastic Jesus said, “John! Three-Sixteen!” in a William Shatner-esque fashion before continuing in a much kinder tone with, “For God so loved the world, that he gave his only begotten Son…”

Hm. Jesus seems to speak about himself in third-person King James. The blue eyes, brown hair and surfer’s tan weren’t enough, Jesus has to speak in archaic English too. 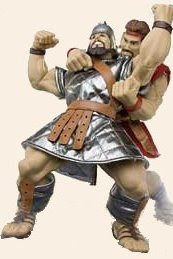 You have no idea how much my geek side was begging me to buy Jesus right then and there. I was arguing with myself! If I could have found a way to make the $14.95 go to a charity of my choice instead of the One2Believe company at that moment, I would have done it – in half a heartbeat. I might buy him anyway tomorrow – but it will be an expensive purchase because I’ll donate an additional $30 to the Freedom from Religion Foundation just to balance the scales a little.

I want that plastic Jesus. In my head I’m already planning how to reprogram his little voice box. Maybe I’ll be able to reverse engineer his electronics, wipe out his voice and drop in my own favorite recordings. Maybe I’ll have to gut plastic Jesus and stuff his interchangeable torso with the little 256 MB MP3 player I have kicking around in my desk drawer. Ah, Jesus with a USB hookup strikes my fancy!

Whatever – I’ve got plans. Now excuse me, I need to dig up some Sam Kinison and Andrew Dice Clay recordings! Oh, and maybe some Shatner too – after all, both have that same stiff stage presence. Klingon! Does anyone have any Klingon recordings? Nevermind… I’ll just scan through my Star Trek VHS tapes…

I did it. I bought one last weekend. He’s still in his box, and when I get some time I’ll document his unpacking and eventual plastic & electronic dissection.

Two corrections – the dolls on the shelf, and the Jesus in my possession all have brown eyes, not blue. I didn’t notice eye color when I was examining Jesus the first time because, well, he had just called my NAME!

Second correction – Jesus doesn’t speak in archaic King James. Although the message isn’t different from a King James Bible, he instead seems to speak in a Mr. Rogers version of the Bible.

But soon, I shall give Jesus the gift of tongues! Mwhahahahah!

Maybe I’ll put the resulting Jesus up for sale on Ebay. I wonder if anyone would bid on it?