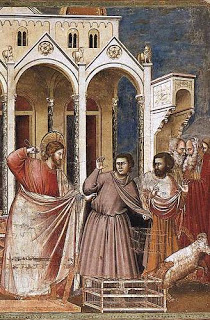 I sometimes visit the local Christian stores when I’m looking for a new Bible or I want to investigate a particularly interesting bit of Christian mythology. One thing I’ve noticed in these stores are the sheer amount of Christian knick-knacks, dust catchers, and wall hangings, including glurgy poems shellacked onto wood, and those overpriced, repetitive, mediocre paintings by a certain “artist of light”.

I’ve mentioned before that the embarrassing fervor of selling has turned some Christian groups into a ‘Den of Thieves’, but even I didn’t think it would include sweatshops.

Ed Brayton of “Dispatches from the Culture Wars” just broke a story on the use of child labor in Chinese sweatshops to produce items sold in Christian stores. Conditions in the shop mentioned don’t even come close to meeting minimum standards as required by Chinese law, never mind meeting basic human rights.

From the first part of what seems to be a multiple part story:

The crosses are marketed in the United States by the Association for Christian Retail (ACR, founded as the Christian Booksellers Association). ACR supplies nearly all of the nation’s Christian specialty stores with a wide range of items, including Bibles, Christian books, apparel, music, videos, gifts and greeting cards.

Perhaps its largest client is Family Christian Stores, a Grand Rapids-based company that is the biggest Christian retailer in the nation with more than 300 stores. ACR did $4.63 billion in business in 2006, at least a portion of it from the crosses made by workers at the Junxingye Factory in Dongguan, China.

I may have a somewhat different attitude toward sweatshops than other Americans might have. My wife is from South Korea, and we have discussed this. The attitude of Koreans of my generation and a bit older is that Korean factories saved many people from sure poverty, and gave them a chance to earn a living. At one time the choice wasn’t that of working in good conditions vs working in sweatshop conditions, instead the choice was that of working, or not working at all.

From my admittedly limited observation, I think that the South Korean goal to educate all of their children, their work ethic, and the willingness of their young people to protest against unfair conditions contributed a great deal toward turning South Korea from a third-world country to an economic powerhouse in just decades.

So although I’m somewhat forgiving of sweatshops, I find this story upsetting. Conditions in the Junxingye Factory in Dongguan, China don’t even meet minimum standards by Chinese law!

“Workers are paid just 26½ cents an hour, which is half of China’s legal minimum wage (already set at a below-subsistence level) of 55 cents an hour. After fees deducted for room and board, the workers take-home wage can drop to just nine cents an hour.

I’m realistic in that I know how difficult it is for a consumer to determine where and how products are made. I would attach little or no blame to the owners of these crosses. However, as an engineer, I am well aware of the amount of research I do to determine how a product is made, and I’m also aware of the research done by our Procurement department to insure that products we purchase don’t violate human rights. We fly our people to other countries in order to see their factories first hand.

And we are just some electronics company, ya know? Dedicated to our customers, and not particularly holy.

I would expect a company in the business of selling Christian goods would be much more careful than the company that I work for.

Shouldn’t the Association for Christian Retail be asking themselves, “What would Jesus buy”?