First of all, welcome to those who have made it here from ABC 30 News. Yes, I’m one of the Atheists you saw in the interview that is supposed to air today.

It was a busy morning for me today. I had taken the day off of work in order to see the first showing of “The Golden Compass” here in Fresno. Ordinarily I would never do something like that – I’m quite content to wait until it is convenient for me to see a movie.

But I received an email from Liz Harrison of ABC 30, asking if any local Atheists would like to see the Golden Compass and then be interviewed together along with a couple of representatives of the local Christian community. I agreed to be there, and I put out a group wide email to members of the Central Valley Alliance of Atheists and Skeptics asking if any other Atheists would like to attend. Happily, Will and Ben were both able to make some time this morning. No one else was able to take the day off of work on such short notice.

So, what did I think of the movie? Atheists everywhere have been hoping that the movie doesn’t suck. It’s odd, Atheists are so used to having people think of us as being immoral, or arrogant, or evil that it no longer really bothers us so much. However the general Atheist opinion seems to be that they would hate to be represented by a poorly made Hollywood movie.

So here’s my take. The movie didn’t suck, but it also wasn’t nearly as good as I hoped it would be.

I’ll try to keep the spoilers down to a minimum, but if you don’t want any at all I suggest you stop reading now. Click on the interview after the show to skip the spoiler parts.

Don’t get me wrong, Lyra’s universe was portrayed exactly as it was in the book in all of it’s Steampunk glory and more! And the portrayal of Daemons was exactly how I see it in my head. The casting was excellent – Dakota Blue Richards made a perfect Lyra, who fit very neatly the person I pictured in my head. Sam Elliott played a perfect Lee Scoresby, and using Kathy Bates as the voice of Hester was icing on Scoresby’s cake.

And Nicole Kidman as Marissa Coulter was very close to perfect – even though she played a blond instead of having Marissa’s “sleek black hair”.

Other casting wasn’t so well done. Daniel Craig played Lord Asriel in a manner that seemed like he was just phoning it in instead of making Asriel leap off of the screen. In the books Asriel is an electrifying personality that dominates everyone and who almost effortlessly commands attention and respect. Daniel Craig didn’t come close.

And oddly, Christopher Lee as the First High Councilor – well, Mr. Lee is good in whatever he does, but he seemed so overqualified for this role that it actually made the character seem a bit lopsided. I would have been much happier with Lee as Lord Asrial and with Craig as the High Councilor.

You would think that with all the attention paid to special effects and to casting that Director Chris Weitz would be able to make the complex intrigue from the book flow effortlessly onto the big screen – but it just didn’t happen.

I kept thinking of how Director Peter Jackson was able to reproduce the complex saga of the Lord of the Rings in cinematic form. “The Fellowship of the Ring” was more than an hour longer than “The Golden Compass” and even at that length Jackson wasn’t able to show all of the intrigue, he had to leave details out.

But that length did allow Jackson to make a movie that felt huge, unhurried, open. Even though “The Golden Compass” was just under two hours in length, it felt … rushed. It was like Director Chris Weitz had an urgent appointment elsewhere so he hurried this movie so he wouldn’t be late.

Major plot points were revised in order to save time and explanation. One of those points changed the basic character of Iorek Byrnison, and downplayed the role of the other Panserbjørn. In the books, Iorek was tricked by Iofur Raknison into killing an innocent Panserbjørn during a dominance contest over a female. The innocent bear was given drugs by Iofur in order to prevent him from backing down when it became clear he was the loser of the contest.

This shows that Iorek was fearless, capable, and without fault in his actions, even though he blamed himself for the other bear’s death.

In the movie, Iorek was simply banished after losing a fight in single combat with Iofur over the throne. Iofur used drugs to kill the previous king, Iorek’s father, and then won in combat with Iorek. Iorek’s banishment from the Panserbjørn wasn’t due to shame for breaking the code of the bears, but merely on Iorek’s whim.

It changes much of Iorek’s motives.

And things like this were done throughout the movie, motives were ruthlessly changed in favor of making them simpler, easier to present on film.

The result is a movie that contains major plot points around memorable events in the book, with a weak, hurrid progression between these events. Cinematic whiplash where the viewer is rushed from event to event with no real explanation of why or how they got there.

Because of this rush between events, it was very hard for me to become emotionally invested in the characters. I found it hard to care about them until the movie was nearly half-way done, at the point where Lyra is apologizing to Iorek for getting him involved in a duel to the death with Iofur.

The movie ends before the final chapters of the book. At this rate it will take 4 or 5 movies to present the whole trilogy. And by the end of this movie I felt disappointed. So much of it was so different from the books that I kept wondering if I would have enjoyed the movie if I had never read the books. I’ll be interested to see the opinions of those who see the movie first.

The interview after the show

Afterwards our group retired to the nearest coffee shop (located in Borders bookstore) to spend some time discussing the film over a welcome cup of hot chocolate. As I said, myself, Will and Ben represented the Central Valley Alliance of Atheists and Skeptics, while the religious side was represented by a school teacher named Teresa Barber and by Steve Williams who told me he worked in insurance. No, seriously, that’s all I know of them. I suspect that Steve might be active in the church, and Theresa is probably active in faith-based politics, but I wasn’t told more. I guess I’ll have to find out by watching the interview on television.

Theresa, Steve, if either of you read this, it was a pleasure to make your acquaintance, and I hope you’ll let me know if I get the details wrong.

[Update: from the ABC 30 site, I’ve discovered that Steve Williams is an Evangelical Christian leader in Fresno, and that Teresa Barber is a children’s pastor at Valley Christian Center. – M]

I have no idea how much of Liz Harrison’s interest was genuine or professional, but she led us into discussion with each other in a way that indicated she was fascinated with our take on the movie, and that she was interested in the Atheist viewpoint. I’m afraid that the Atheists sort of dominated the interview, although I’m sure that may be adjusted slightly in the editing room.

We talked for nearly an hour. We were pleasant, and there were no major disagreements or drama of any sort. Anyone watching us would have thought we were a group of good friends, if they ignored the cameraman.

Honestly, it would be a pleasure to be friends with these people, and I hope they could say the same of us.

Few of us agreed that this would be a movie for young children, although Will pointed out that violence on Saturday morning cartoons equals or exceeds that in “The Golden Compass”. The books were written for the same sort of audience as “Harry Potter”, or perhaps a bit older, with enough intrigue to keep adults interested, so I suggested that teenagers would be better prepared for this movie. 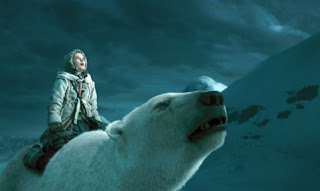 I tried very hard to point out that The Catholic League was urging a form of censorship by advocating a complete boycott of the movie so that it failed and therefore would be prevented from dragging children over to the Atheistic ‘dark side’. Worse, they pressured Scholastic Children’s books to prevent them from publishing any further books by Pullman.

Censorship of any book or movie in order to prevent others from ever seeing it is something that I consider an especially vicious form of evil. Instead, I advocated that parents should be the ones who decide if their children should see this movie or not. I really hope that came across.

Personally, I believe that if a parent does decide to allow a younger child see this show, that he or she do so together with the child. The movie, even in its simplified form, is complex and should be discussed afterwards.

But maybe I’m wrong. Maybe a child would be happy enough to merely see Lyra riding Iorek through the snow.

Ms. Harrison promised that we would be able to see the interview online. When it becomes available, I’ll link to it from here.

As a disclaimer, I never said I headed CVAAS, I did say I was a co-founder, along with my friend Richard.

On another note, out of all that talking I knew I would only have a brief speaking part. I just didn’t realize it was THAT brief!