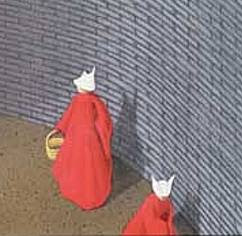 Don’t ask me how it happened, but for some strange reason last night, my computer became a sort of time machine. Instead of the Internet of 2008, for about an hour I was connected to the Internet of 2015. (I think it had something to do with leaving that can of Bean Dip on my overheated wireless router.)

It’s difficult to get the tenses correct when talking about future events, so pardon any lapses.

So, being the curious type of person that I am, I decided to peruse several online news sites. Right away, I found out that Roe V. Wade had been overturned in 2012. After that ruling, several sweeping changes were made to “support the rights of the unborn.”

From an article in the New York Times online I found out that there was a Supreme Court ruling on Scheidler V. California where life was determined to start from the moment of conception – at the point where the sperm met the egg. Chief Justice Roberts and Associate Justice Alito wrote in this majority ruling, “… and so the right to life is finally extended to all humans, from the moment of conception, and these smallest of humans must now be extended equal protection by law.”

I then wandered into someone’s blog who has been documenting the massive fallout of litigation that has come from these Supreme Court rulings. For example, most radical right to life groups have always asserted that “the pill” was an abortificant in that it would, in a few cases, cause a fertilized ovum (or blastocyst) to fail to implant in a woman’s uterine wall. With the overthrow of Roe V. Wade and the new definition of life that includes conception, they decided to test this case. Although there are many pharmaceutical manufacturers that produce estrogen and progestogen oral contraceptives, Wyeth was selected as the pharmaceutical company to sue, probably due to having headquarters in New Jersey.

In this case (Donna Schinder V. Wyeth, Morris County courthouse) Schinder won an immediate injunction against Wyeth, preventing them from manufacturing, transporting, or selling “the pill”. Wyeth appealed to the State, and finally to the Supreme Court, and lost. The Supreme Court ruling handed a further win to pro-life supporters by saying that the willful use of “abortificants” was tantamount to murder.

At about this same time, bills were introduced jointly in the House and Senate that made it illegal to manufacture, transport or sell any products that were intended to interfere with the normal progression of embryo development, starting from the point of conception. This joint bill was quickly signed into law by President Huckabee, and all oral contraceptives became immediately illegal in the United States. Along with illegal narcotics, customs agents started searching for illegal birth control pills. (I couldn’t figure out if they started training “contraceptive dogs” or not.)

There were still forms of legal contraceptives available. Condoms, spermicide, diaphragms. And as usual, groups like the American Family Association and the Family Research Council campaigned against them, somewhat successfully. For example, Condoms were then sold “behind the counter” by law in many states. In a few Southern states they can only be sold to those older than 21, with a valid ID.

In 2014, the first cases of “embryo death or endangerment” under these new laws were opened against women in several states. There have been cases prosecuted in the past involving “Fetal Rights”, and the use of drugs like cocaine, but under the new fetus protection laws the cases took a different course.

The first of these happened in Charlotte, North Carolina, where a manager of a Starbucks coffee shop called the police on a pregnant woman for ordering and consuming three “Doppio Espresso” drinks on premises. The case, “The City of Charlotte V. Linda Johnson” ruled against the defendant, who was charged with “willful child endangerment” for “knowingly using a substance likely to cause miscarriage.” Mrs. Johnson, in her first trimester, was in divorce proceedings at the time of her arrest, and admitted during interrogation that she no longer wanted “that bastard’s baby.” She was sentenced to 18 months in jail, and she was required to forfeit her newborn to Child Protective Services upon birth.

There were a lot of cases like this across the USA.

But I found I was more disturbed by other cases.

For example, In Vitro Fertilization in the United States will come to an abrupt halt. This is because IVF is a sort of ‘gamble’ wherein several of a woman’s eggs are fertilized and introduced to the womb in the hopes that a couple of them implant. Those that do not implant are ‘washed out’ naturally. This was called “gambling with life” in a popular prime-time news show that also had an in-depth expose on the rate of death of embryos frozen for future implantation, called “Snowflake Babies”. Overnight medical insurers refused to cover IVF, and a team of Federal Prosecutors was formed to look into the IVF industry.

Another disturbing case (still in the works as of my connection to the year 2015) involved a high profile Texas state prosecutor as the defendant. Mrs. Jerri Lancaster is being investigated in 2015 by the State Attorney’s Office (her employer) for publicly acknowledging that she is attempting to conceive while in a high-stress job. Even today we know that stress is a risk factor for pregnancy, in some cases a blastocyst will fail to implant in the uterine wall due to stress in the mother. Mrs. Lancaster’s public announcement was seen by Texans to be a sign of “negligence” toward her future unborn child.

The fallout of this case may have a profound affect on the types of jobs that women of child-bearing years are allowed to hold.

This really started to worry me. Were women going to be forced out of the workplace and back into the home, so they wouldn’t be guilty of possible “negligence”? How would the state reduce the numerous risk factors for the epidemic of “spontaneous abortions“? How would the State be able to ensure that an active woman of child-bearing years with a stressful life wasn’t pregnant?

I tried to find out, but at that point my wireless router failed, and there was an acrid smell of burnt bean dip in the house. I went to bed and dreamed about the complete loss of Woman’s reproductive rights – it looked like something from “The Handmaid’s Tale“.

It wasn’t until this morning that I realized that I could have downloaded 7 years of future stock market trends and sports scores. Somehow I don’t think it’s much of a loss – wealth wouldn’t make me happy in this future world.