Yesterday I said that the best art is made intentionally, when the artist uses his or her skill, knowledge and imagination in order to create that which he or she envisions. Art made accidentally is a “happy accident”, and artists who try to recreate their accidents become slaves to their process, instead of masters of it.

So what if this is applied to non-traditional media? 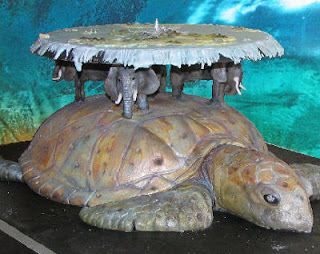 It becomes more difficult to define art when it is applied to less traditional media. Master craftsmen are sometimes called artists due to the beauty that they create, whether it be a baker’s wedding cake or a carpenter’s chair or a luthier’s violin. I would disagree that these masters are purely artists because their creations are designed primarily to answer a need, to fulfill a function that is other than art. However, a craftsman could easily cross into the realm of art if their designs were created to, in themselves, become art – to inspire emotion in the audience. For example, a solid gold fiddle, the Discworld cake, or a wooden sculpture.

It is the artistic use of non-traditional media that makes it difficult for me to evaluate some forms of art. For example, the artistic media could actually be a news reporting agency. The “art” created by a skilled and knowledgeable artist might be to manipulate a television report in order to inspire an emotion in the audience… perhaps an emotion of outrage? The skill involved is that of manipulating people, what a hacker might call “social engineering” – and the media involved, a news agency, may be unaware of the manipulation. A possible example might be Damien Hirst‘s latest work – a rotting shark in a tank of cloudy preservative. If Hirst’s creative vision was to manipulate public opinion through the medium of a reporting agency, then he succeeded.

On the other hand, if he just wanted to create a shark in preservative and call it art, then he failed. It was not art except as a “happy accident” to a minority of people who found it worthwhile. It was not art because it did not require a great deal of skill, other than the ordinary type of skill that it would take to organize rather mundane resources. On a smaller scale, you or I could do the same with a frog and a trip to Wal-Mart and Home Depot. The skill involved, if any, was that of manipulating a donor for funding, and manipulating the media for exposure.

In my opinion Hirst is an artist only if you consider the media. He is an artist in the manipulation of public perception in the media. But his skills in preserved shark seriously suck.

In this way I also believe that some self-termed artists have played off their outrageous creations with an “I meant to do that” attitude when they did not get the audience reaction they intended. This is why I don’t consider Duchamp to be an artist because I think his manipulation of public opinion was not based upon skills or knowledge. I think this manipulation was, at least at first, accidental. His original intent was to poke fun at the world of art marketing. I think he was cynical enough to take advantage of an otherwise surprising public success by acting mysterious, by acting as if the public reaction he received was what he intended. I think his manipulation of the medium of public opinion was merely through the use of “happy accident”, not skill.

Of course, at this point it becomes hard to tell the difference between art and a good con. If an artist’s creation is a resounding flop that misses the result the artist intended, if it instead generates feelings of revulsion or disbelief, the artist can merely say that he meant to do that all along, that he was only manipulating public opinion.

The problem I have with this form of “art” is that I dislike being manipulated in this manner. I don’t object to having my emotions manipulated to make me care for a character in a book, or to feel emotion for a figure in a painting. But I hate being emotionally manipulated merely for someone else’s selfish benefit. This manipulation of public opinion for selfish gain is another reason why I dislike Picasso.

And I seriously dislike an artist who attempts to manipulate my opinion in this manner so that he or she can cloak a lack of ability within a snooty “I meant to do that” excuse. This goes double for the art critics who sniff at my inability to appreciate the beauty of the Emperor’s clothing. At what point does an art critic’s opinion become merely media, used to manipulate my own emotions?

I’ll wrap this up tomorrow when I write about the sort of art you’ll find in my “Atelier” series, and how that art fits with my definition of “art”.

Read Part III of “What is Art?”