There is something about New Mexico that attracts artists. Maybe it is the cost of living, or perhaps its because it is a beautiful land in its contrasts – from painted mesas and flat no-man’s lands to snowy mountains. When the song “America the Beautiful” speaks of “purple mountain’s majesties” I always think of Sierra Blanka, or of Capitan as seen from Roswell.

Steve Hanks resides in New Mexico – and although his first relocation from California was as an unwilling teenager, he went back there later in his life for his art.

Today I’m presenting two works from this living master, who has become a master in an unusual medium for painting – Steve Hanks paints his pieces in watercolors. And since he has his own Internet presence I’ll be brief in describing him, instead directing my readers to the bio and news articles on his own website.

Steve Hanks’ paintings are realistic and romantic, and are very much in the spirit of past oil painting masters using what seems to be Academic techniques mixed with modern subjects and poses – all in watercolor. Although Hanks is proficient in oils, he avoids them due to an allergic reaction. He’s developed his own style in watercolor that results in paintings that lack the washed-out, “unfinished” look that watercolors often have. Instead, his paintings look as tightly detailed, as exact as any oil painting – with transparent colors layered upon each other to create depth and complexity.

The paintings I’m showing today are cropped details of the originals. As aways, click on the image to see the entire painting in full from the Art Renewal Center.

My readers know I have a fondness for figure painting, and yes I’m attracted to the female figure. Steve Hanks paints female nudes, and I have to tell you he is a wonderful at it – bringing a depth that is rarely seen. 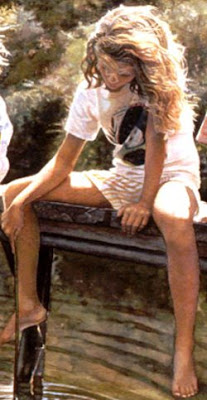 But he paints other subjects too, and I’ve got to say that he captures children in a way that shows them at their best, and shows them as they are too – individuals in their own right. Too often when artists paint children it is as a prop to the main subject – but the children in Hanks’ paintings have depth to them.

The first I’m showing is called, “Shelter for the Heart”. I love “big sister, little sister” aspect to this painting, where the big sister seems to be displaying what she will be like as a future adult – but she’s still young enough to show her wonder at the falling rain. Click on the image and check out their galoshes! And then notice just how much detail, finely perfect detail is in this painting, and tell yourself that it’s “only” a watercolor!

The second painting I’m showing is called, “A World for our Children”. The painting is carefree and open, but the title hints at Steve Hanks’ values of social responsibility. He went to college in Oakland California during the more explosive times of the late sixties, and his exposure to social justice is evident in his attitude and his paintings. Bob Dylan’s music and social commentary still influence Hanks even today, and Hanks has learned to be subtle in how he presents this to his viewers. A viewer who first sees “A World for our Children” can’t help but feel happy, young and carefree again. It is only after noticing the title that the viewer’s attention is brought to the question of what sort of world are we leaving for our children?

This is the other aspect of Hank’s abilities… he makes you think. And that’s a good thing.

Go take a look… you won’t be disappointed.