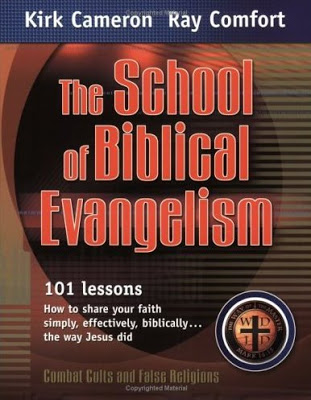 Comfort starts this section by saying that God, not man, is in control of our destiny. Comfort says:

If man is in total control of his future, then he should at least be in control of his own body.
…
God has set his body in motion and there is little (man) can do about it.
…
(Man’s) kidneys, bladder, intestines, heart, liver, lungs, etc., work independently of his will.

Christians give God credit for our normal function, but often refuse to credit God for our normal handicaps. If I should credit God for the way that my heart works, I must also credit him for my radical astigmatism. He should receive full marks for birth defects like Autism, and Anencephaly.

I’m sure this isn’t what Comfort intends for his opening paragraph. However, I’m unsure exactly what Comfort wants us to take from this. Humans are not in control of our destiny? Isn’t that heresy to the Living Waters ministry? I didn’t think that Comfort would be happy with predestination or Calvinism. If true, this would imply that our final destination is preordained. You’re going to Heaven, or you are going to Hell, and there isn’t anything you can say or do to change it.

If we humans are not in control of our destiny, then freewill is a sham and evangelism is unnecessary.

I’m sure Comfort could tap-dance his way out of this position if he wished. My point is that he is treading a fine line where he wants to give his God infinite abilities while still allowing humans the right to screw up their own lives. (Or in Christian terms, fail to become Saved.) This is an inherently contradictory position, and one of the basic problems with God.

Allow me to explain this. If God can see the future as easily and as intimately as he can see the past, then he can see our final destination just as easily. He knows all of the decisions we will make over our lifetime. This theological determinism means that God knows our actions in advance, and thereby negates freewill.

C.S. Lewis answers this problem by giving God the ability to exist outside of time, and therefore the ability to see how our futures are altered as we make changes in our ‘now’. From “The Screwtape Letters”, where the demon Screwtape is talking about his enemy, God:

How (God) does so is no problem at all; for the Enemy does not foresee the humans making their free contributions in a future, but sees them doing so in His unbounded Now. And obviously to watch a man doing something is not to make him do it.

Imagine God, with the ability to examine creation from outside of time. He can then look at each of our lives like threads or strings laid out, side by side on a table. If we make a choice in our “now” God can see the string reposition itself along it’s length to end in a new destination. God could, if he wished, influence any critical point in our “now” in order to nudge the string to a new position.

Imagine again our lives as string on a table. But now, instead of a single thread with an ultimate destination, there is a string with multiple branchings, becoming more or less bushy as the branches separate or come together, in a complex and twisty entanglement with multiple different final destinations. This mess represents all the possible choices that we could take in our lives, an almost infinite number of possible future “yous”.

This entanglement would not bother an omniscient God, who would be able to comprehend the whole bushy mess as easily as we comprehend a single string. He could hold every possible decision that we could make in his mind – easily. No decision path would be a surprise to him, because every path already exists, and he is intimately familiar with each of them. Again we are confronted with theological determinism and the end of our freewill.

If Comfort wanted to address Atheist problems with God, he could discuss problems like theological determinism in depth. But he doesn’t. Comfort prefers easy, simplistic answers. Instead of refuting Bertrand Russell, Robert Ingersoll, or Daniel Dennett, Comfort prefers to refute a list of off-the-cuff questions he found in a somewhat obscure corner of the Internet.

And where did those questions come from? They were hosted in a corner of the website of Atheists United.

Atheists United is a Los Angeles based non-profit Atheist organization. It was founded in 1982, and it works with the atheist community and various atheist organizations throughout Southern California, concentrating on the California Inland Empire. Atheists United works closely with the Center for Inquiry and the Committee for Skeptical Inquiry, they work with the Secular Coalition for America and have hosted Lori Lipman Brown on occasion. They work together with people like James Randi, Michael Shermer, and Dr. Goparaju Vijayam from the accomplished Atheist Centre in India. Recently Atheists United assisted Dr. Vijayam on a whirl-wind speaking tour of the Western United States, of which I myself was recruited and involved.

Atheists United hosts an online library of atheistic topics, with dozens of articles written by famous, and not so famous atheists. Most articles are well written and scholarly. A few are humorous or off-the-cuff. There are more comprehensive atheist libraries hosted by other online organizations. I find the Secular Web library to be the most useful.

Comfort dismisses everything that Atheists United has achieved, and jabs them with a little insult by calling them “a Hollywood atheist organization”. The atheist questions that he answers in Lessons 72 and 73 are the simple list of off-the-cuff questions that were written a decade ago and then tucked away, forgotten, in an obscure section of the Atheists United online library. The current Atheists United president, Stuart Bechman, told me that they are not well expressed, and perhaps he should remove them? I argued instead that he should leave them. They demonstrate Comforts preference for answering the easy questions instead of the hard questions.

And Comfort manages to fumble his answers to these questions, he even skips a few of them without mentioning that he’s done so or why.

Comfort answers 30 of these 37 questions, and I’ll be picking my way through his answers one by one in a tedious manner starting in my next post in this series. And although I have some help in this from Atheists United (thanks Stuart!) I’m really not looking forward to the process.

You can see the questions in their original form here.