Skip to content
I would like to introduce you to someone. This is Ronald Lee Darsey. He goes by Ronnie Darsey to his friends. 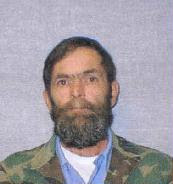 Ronnie has been married three times. His longest marriage to his second wife lasted 3 years, 6 months, 22 days. Ronnie is ex-Army. He did one tour overseas in Germany. He worked in the motorpool. Ronnie is fond of his Army days and feels like it makes him Billy bad-ass. He usually wears a military jacket during the winter, but he buys his military wear from military surplus or second hand.

He grew up in Houston Texas, at 9405 Shoreham Street. He has two brothers and a sister.

Ronnie was born January 13, 1952, and he has a learning disability – he is very dyslexic, and he had not overcome his disability by the age of 32. Despite his disability and due to training from his father and from the military, Ronnie was a genius at repairing cars. He’s a natural shade-tree mechanic. I have no idea how he is reacting to the computer-chip controlled cars of today, but I do know that in 1983 he called aluminum block engines a “lie”, and swore that anyone who believed in such a thing was an idiot.

In 1984, while working as a mechanic in an auto-repair shop, Ronnie was replacing a flat tire and filling the tire with air. He over-filled the tire and it exploded, severely damaging his right hand. The company settled Ronnie’s injury claim and Ronnie never regained full use of that hand.

Ronnie is 5′ 11″ tall, 140 pounds, with brown eyes and hair that is brown to black. He usually wears a full beard and mustache, but he shaves both off about once ever two years or so. His receding chin is evident without the beard. He can be very charming when he wishes to be.

Why have I introduced this gentleman to my readers? For three reasons.

First, Ronnie is a pedophile. His victims included the daughters of the women of his last two marriages. His third and last wife was the first to press charges against Ronnie. His second wife did not.

Ronnie has been convicted twice of indecency with a child / sexual contact with a child. His first conviction resulted in a 5 year sentence in Texas, his second conviction resulted in a 10 year sentence, with parole after 5 years served. His victims of choice are prepubescent girls. In two of his three marriages he married women 9 and 12 years older, both of whom had vulnerable daughters. I don’t know how he met his victims after his third marriage, but I suspect he met his last victim through a girlfriend. As I said, Ronnie can be charming when he wishes.

That brings me to the second reason why I’m introducing my readers to Ronnie. He comes up for parole this month. Due to prison overcrowding in Texas, I fully expect him to receive parole. In fact, Texas seems to be preparing for his parole since they’ve re-registered him on the Texas Sex Offender Registry. He’s going to be out on the streets soon. Ronald Darsey is an unusual name, so I’m betting that any potential future girlfriend might do a Google search and get this entry. This is important to me because the Texas Sex Offender registry is not indexed by Google.

And lastly, Ronnie is my, and my sister’s, ex-stepfather. My mother was his second wife, and my sister was one of his early victims. I know him personally, I lived with him for 3 years. And while he wasn’t sexually abusive toward me, he was emotionally, and to some degree physically abusive.

I’m over him now, and have mastered the resulting anger by letting it go – essentially by forgiving him. I have had help. I still get flashes of anger that require me to forgive him all over again.

But forgiveness does not abrogate punishment – it does not nullify prudent warnings to others. Ronnie deserves the punishment he’s been given, and if you are googling his name you are doing so for a reason, and you need to know what kind of person he is. If Google has led you here, email me, and we’ll talk.

My sister is still dealing with her own Ronnie demons. Hers is not my story to tell. She has given me permission to say what I’ve said here. I would not advise talking to her about this uninvited because her big brother can get VERY protective of her.

Ronnie is on his second strike – his third will result in a lifetime of prison. I have full confidence that he will offend again because I know that the overwhelming majority of pedophiles continue to offend. I also know what Ronnie was like, and if his personality holds true, he will reoffend. The thought of his future offense scares me, because a child will get hurt. I wish he could just skip the offense and go right back to jail, but justice doesn’t work that way.

Ronnie can be dangerous to those who are weaker. He’s a coward when confronted by an equal. He used to get drunk and listen to Country and Western and he was very fond of his shotgun and rifle. As a felon, he is of course no longer allowed to own or have guns.

Finally – this is probably the most personal post I’ve ever made to my blog. I do this because I think Ronnie is a dangerous person. I can’t keep him in jail, but I can put his name on the ‘net for anyone to see.

And to any who might be thinking dark thoughts about this guy, please – do NOT go near him. I won’t post his address or telephone number, and I won’t advocate or agree with any sort of violence. He’s already in a personal Hell, and nothing we do will change that.

Just be aware that he’s there.

——————
Update: 9 Aug 08
My sister, Tanya, has written a great deal about Ronnie’s impact on her life. You can read it on her journal here.

——————
Update 19 Jun 2013
I’ve been learning more about Ronnie’s past.  Apparently he was a felon and parolee while he was my step-father.  If I had known, I could have made a call to his parole officer and had him removed from our lives.