A long time ago I watched Johnny Carson’s guest “The Amazing” James Randi on the Tonight Show, as Randi exposed Peter Popoff and conducted “psychic surgery” on a willing Tonight Show audience member.

Mr. Randi was so entertaining that I immediately liked him. But that was just the impression I got of him from television. I wondered if he was different in real life.

Today, I had the chance to put that to the test, in a style that I hope Randi would approve. I got to meet him, share breakfast, talk with him and listen to his wisdom. And I have to say that I was right, Mr. Randi IS different in real life than on television. On television, Randi is merely an entertaining and interesting person who comes across as a nice guy too.

In real life, Randi is all of that, cubed and squared again!

First, I’m impressed with how quick he is mentally. It’s hard to keep up with him. I was able to contribute a little from my specialty in Engineering (Remember Randi, don’t cut the RED or the BLACK wires! You need them for your iPhone!) 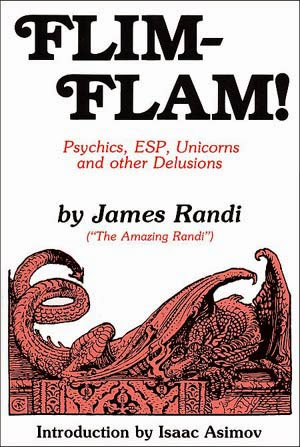 And I think it might be difficult to keep up with Randi even physically. I didn’t have much opportunity to test that theory, but the sense I got was that he was full of boundless energy, like the energizer bunny.

I did get a signature on my copy of Randi’s book Flim-Flam! This book came out back in 1982. I purchased this book back in 1997 when I was starting my journey in deconverting to become an Ex-Christian.

When I was growing up, I was a believer in a lot of things. Besides being a Christian, I believed in things like psychic phenomena and dowsing. This book kicked a large hole in the side of my woo-woo beliefs. And it gave a thirst to learn more.

It was books such as this that gave me my start in real rational thinking.

I’ve been gratified to compare things on his speech today to the things I’ve been doing as a skeptic. My best comparison is that I tested Randi’s claim that the Counterfeit Detection Pen was pretty much useless.

Even today, two years after my original post on the detection pen, I still get several hundred hits a month on that page, and I’m in the top Google results for “DriMark Counterfeit Detection Pens”. Not too bad.

And while my pages on Homeopathy are still as relevant as I first wrote them, Randi told us about some twists that might help my readers better visualize the sheer scales involved in Homeopathy, and from his information, I realized I need to make my Homeopathy page more current.

I took some time to take a short QIK video of Randi during his speech this evening, but I realized almost immediately that it was the wrong tool for the job, so I stopped. Still, you can see the video that I do have here.

All in all, it was a good day today, a day that started with, and ended with James Randi. Any day like that is a Good Day!

Still, there is a sad note that I must end on.

Peter Popoff is back, and not only is he back, but he is doing the same thing that he was doing way back then, with one exception. Now he makes MORE money at it than he did before Randi exposed him. Take a look at this: