Skip to content
Why is it that Christians seem to hate Thanksgiving?

Yes, I’m only half serious here. But come on! The Christmas music has already started on the local radio station, and Christmas lights have already started showing up on scattered homes in our neighborhood. The local Wal-mart and Target stores have their full Christmas displays set up, and have dedicated major floorspace to Christmas decorations while giving only a token to Thanksgiving.

The stores that do advertise Thanksgiving do so as an afterthought, tucked away in a corner as if they’re ashamed. In stores I’ve already heard the Muzak versions of “God Rest Ye Merry, Gentlemen” and “Hark! The Herald Angels Sing”. I did sort of enjoy the hard rock version of “O Holy Night” on the radio – but only because I imagined it as a concert by Metallica.

It is like a war movie, “The Holiday that Conquered the Calendar!” Hanukkah and the Winter Solstice are occupied territory. Christmas then unleashed a barrage and Thanksgiving fell, in flames. Light cavalry with focused air support easily took Veterans Day afterward. Our only hope now is Halloween – it’s a strong holiday and is usually able to go toe-to-toe with Christmas. 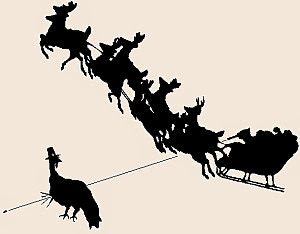 But the ‘War on Holidays that are Not Christmas’ has even come to Halloween. Over the last few decades Christians have been holding “Harvest Parties” at their churches, forbidding the wearing of traditional costumes, and even creating Christian hellfire and brimstone morality plays disguised as haunted house wannabes.

Halloween’s bunkers are holding, but they’re under heavy fire!

As a disclaimer, I’ll freely admit that I do enjoy Christmas – I’ve said that before. But Thanksgiving used to be one of my favorite holidays – and now it’s flying a foreign flag.

So this year I’m going to wish people “Happy Thanksgiving” all the way through Christmas. I think Thanksgiving deserves to regain some of the time that’s been stolen away from it, and maybe by advancing it deeply behind the Christmas front lines the traditional Turkey Day can regain some of its former prestige.

You should consider doing the same thing. If we don’t help the other holidays regain captured calendar days then some day in the future there will only be Christmas. Rise up! Wish everyone a “Happy Thanksgiving!” this year.

And if some Christmas trooper questions your battle cry, ask them – “Why do you hate Thanksgiving?”