Skip to content
I just received a press release from Steorn. You might remember this company from my previous blog posts.

To summarize, Steorn dramatically advertised that they would demonstrate a mechanical “over unity” or perpetual motion machine back in July of 2007. Steorn announced that they would demonstrate this machine at the Kinetica Museum in London England, but the demonstration failed when it experienced “technical difficulties” due to the machine having an unforeseen sensitivity to light which caused it to fail. That was the last we heard about a public demonstration of their equipment.

Personally, I think their machine had an allergy to skeptical observation – but perhaps I’m too cynical? Seriously, I thought they were hyping impossible vaporware in order to attract gullible investors. I believed that they had no intention of creating any sort of real product.

Well, I was wrong, and I’m not afraid to admit it!

The press release from Steorn today has announced the foundation of a new laboratory. But better yet, it announced the availability of test equipment designed to support those “organisations developing rotary and magnetic systems.” Here are Steorn’s first two products in this lineup: 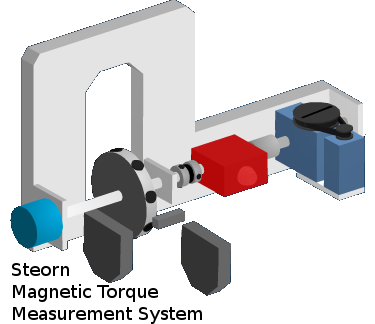 These products seem to be geared for inventors who are experimenting with over-unity systems. These could be anyone from garage inventors to small firms.

On the Steonlab website, the products look sleek and beautiful. They are easily of Tektronix quality in visual appeal. They also come with software packages that create reams of data and graphs automatically.

You have to be a specially accepted member of the Steorn website before you are allowed to view product pricing, so I don’t know how much this equipment costs. However, I read the Steornlabs legal Terms and Conditions with interest:

Wow, that’s not creepy or paranoid at all is it? You don’t see Tektronix doing something as silly as this.

I think Steorn has found a way to make a product that they can actually sell, without coming out and admitting that perpetual motion or energy machines don’t actually work. I think that their product will be geared to those individuals who fervently believe in “over unity”, but who don’t have the foundational knowledge to realize that they can duplicate these sensors in their own labs using off-the-shelf parts. (Hint – buy a Hall Effect sensor, and hook it up to a Tektronix digital storage oscilloscope. Learn to use the basic skills you would learn in a freshman Physics lab to subtract environmental forces from the forces you intend to measure. Learn to use Excel to make your own graphs.)

If you don’t have the training or ability of a competent electronics technician, I guess the Steorn equipment would be pretty valuable to you.

In this press release, Steorn also mentions the release of “ZeroF passive magnetic bearings” due out sometime this summer. But I’m not sure what that could be. The name seems to suggest that these bearings will be free of magnetic flux, which would be useful if your perpetual motion machine is allergic to unforeseen electromagnetic energy. (Light, for example.)

Steorn also announced that it’s over unity machine, the “Orbo” is due out by the end of this year. Finally! I can’t wait to get one. I plan on feeding the output energy from my Orbo into the input and create my own mult-megaton explosion!

But I guess I’ll have to do that in a dark room.