Skip to content
My wife Won was a citizen of Korea, and a Permanent Resident of the United States. (She also passed her citizenship test.)

When she died, I spent a day in Seoul Korea with her mother, registering her as deceased, and turning in her Korean National ID card.

It’s difficult to be anonymous online in South Korea. It is difficult (if not impossible) for a Korean speaking foreigner to get access to a Korean website dedicated to Korean nationals.

In Korea you need your National ID card to open a bank account, get married, go to school, buy or rent a home or car. You are required to display your National ID card upon demand by law enforcement or military officials. You must have the card in order to travel to some places in South Korea (especially near the Demilitarized Zone.) You display your ID when cashing a check, and if you pay your utility bills in cash, you might still be asked to show your ID.

If you lose your card, you must get it replaced immediately (and fill out a form as to how and where you lost it.) If you are caught by police without the ID card they may hold you until they can verify your citizenship. I’m told that this could be an unpleasant process, depending on how you act and what mood the police are in.

But in many ways a Korean National ID card is used much like an American Driver’s License is used for identification. The difference is that in Korea, everyone is issued this card at the age of adulthood (about 19 years old).

Americans have traditionally been very defensive about their right to privacy. We think that some things are not the Government’s business. Stop and Identify statutes in the US require that you give your real name to an officer upon demand – but until the new Arizona immigration law came out you were not required to produce legal identification. (But failing to produce ID upon demand makes you look suspicious, and an officer has the right to detain suspicious looking people… so…)

There is also a very strong religious sentiment against any sort of national identification. In the Bible, Revelation 13:16-18 seems to talk about a form of identification without which “no one is allowed to buy or sell things”. Korea’s National ID card would seem to fill that bill – without a Resident Registration Number a Korean could not open a business, get a business license, or buy public services such as cable television or electricity.

We Americans are also still suffering from “Red Scare”. We recognize the dangers of political power narrowly held by an elite faction or individual, and anything that smells remotely of totalitarianism gives us the heebie-jeebies. Conservatives and Liberals both point to legislation that they say are signs of impending totalitarianism. A national ID card is one item that both camps seem to agree on.

Arizona’s new immigration law, and someone’s Twitter comments, got me thinking – what if America DID have a national ID card? Would it be so bad? And then I found out that we DO have a National ID card. Sort of.

In 2005, Congress enacted the “Emergency Supplemental Appropriations Act for Defense, the Global War on Terror, and Tsunami Relief, 2005”. This act (PDF link) became public law in order to:

Making Emergency Supplemental Appropriations for Defense, the Global War on Terror, and Tsunami Relief, for the fiscal year ending September 30, 2005, and for other purposes.

The Real ID portion of this act is contained in the “other purposes” section. 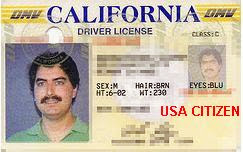 In California, my drivers license is good for 10 years. Under this new law, it must be renewed every 8 years.

As part of this law, states would be required to link their license and ID databases and share driver / citizen data by a state compact called the Driver License Agreement. The DLA is also connected with (or accessible to) foreign countries. From what little I’ve learned about the DLA, if you commit a traffic offense while visiting another state, you may be charged as if you had broken the law in your home state.

Real ID was supposed to take effect in 2008, but due to opposition, and technical difficulties, the deadline has been extended to 2011. As you might imagine, there has been some serious opposition to this act from Conservatives and Liberals. Some states have passed laws or resolutions that refuse to implement Real ID. Democrats talk about how the Real ID technology will allow the government to track your every move, eroding privacy. Republicans are claiming that Real ID will (further) erode State’s sovereignty, giving another State right to the Federal Government.

With all of this controversy, I don’t think that Real ID will be implemented. I didn’t even know it was current law until yesterday – the DMV hasn’t said anything about it to me, so I guess California is waiting to see if they will have to comply first.

I’m still unsure what I think about an American National ID card, whether we enact a de facto national ID like the Real ID act, or a real national ID like South Korea, Japan and China – or if we just keep our current status quo. On one hand, I can see how a totalitarian government like China might misuse such an ID. But on the other hand I saw how it allowed Won to enjoy benefits granted to her by South Korea, benefits that were denied to me because I was not a Korean citizen.

I think I’m going to continue looking for good arguments both for and against this issue until I can make up my mind on it. Right now, the only reason I have for really liking the idea of a national ID card is that I’d get to see conservative religious leaders turn purple as they bang their bibles in protest of Satan’s mark.

Hmm. Maybe if we use an implantable microchip instead of an ID card…