Skip to content
Just off the Christian Newswire, I found out that the Mojave Desert Cross has been stolen. 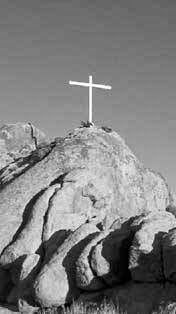 If you’ll recall, this is the same cross that the Supreme Court recently ruled does NOT give the impression that the US Government is advancing one religion over any other.  This cross sat on Sunrise Rock in California’s San Bernardino County, and until recently it was on land that was owned by the Department of the Interior, and overseen by the Bureau of Land Management.  In order to stop government endorsement of religion, Congress authorized a trade – the Veterans of Foreign Wars would get the one acre of land that the cross sat on in return for 5 privately owned acres that sit elsewhere on the Mojave preserve.

The Veterans of Foreign Wars is also following this story.

(As a side note, back in 2003 I was invited to be a member of the VFW for my 2 years in Korea, but only if I believed in a God.  Needless to say, I didn’t apply.  Their rules have since changed, but I think I’ll wait for more of the older VFWs to die before I join.)

I’m fascinated by the Supreme Court ruling on this case.  (Link to PDF of the ruling)  Justice John Paul Stevens wrote the dissent to the decision.  Solicitor General Elena Kagan argued in front of the court that there was “no reason to conclude that the continued presence of the cross would imply government sponsorship”.  If you’ll recall, Kagan is Obama’s pick to replace Stevens, who is retiring.  To me this implies that perhaps Kagan is not a good replacement for Stevens… but I’m still thinking about that.

The real story here is that the cross has gone missing.  Maybe it will be found again, and maybe not.  Perhaps it was stolen for scrap metal, or maybe a crazed band of atheists swooped in and took it.

But if it was an atheist who took the cross, I’ll be among the first to throw shame.  If an atheist thought that by stealing the cross he or she was accomplishing anything more than simple vandalism, then that person (or persons) is wrong.

For an atheist to steal this cross is self-defeating.  Think of the harm that Christians have done to themselves in coming to defend this cross.  As part of the Supreme Court Ruling, the “Latin Cross” (as the war memorial is called) is judged to not be a religious symbol, because it has a “secular purpose”.

Christians who complain about their religious symbols being defaced, that we should “respect” religious symbols, should be the first to bristle at the Supreme Court’s ruling that their cross is merely a secular symbol.

I’m allowed to defile an image of a cross (or stick figures of Muhammad if I wish) because free speech is a protected right in America.  However, I would never steal, or advocate the theft of the Mojave Desert Cross because it is theft, it is vandalism.  And I hope they catch whoever did this and prosecute them.