Skip to content
Today is “Everyone Draw Muhammad Day“. 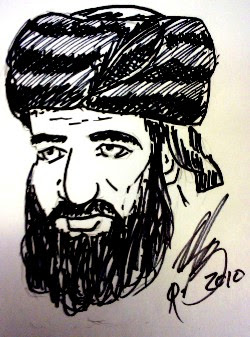 I’m not going to get into why it is right to draw Muhammad, I’ll let the Friendly Atheist explain why it is right, why it is important that we draw this Islamic prophet.

I will say three things.  First, to me it seems as if there is much more evidence that Muhammad actually existed than there is that Jesus actually existed.  At least with Mo, we have articles of clothing, hair clippings, personal possessions.  Not so with Jesus.

Second, just because he existed doesn’t make his claims believable to me.  I’m still waiting for evidence.  I’m still an atheist in that the claims of Islam, like Christianity, still lack convincing proof.

Third, it is always wrong to criminalize free speech.  Art is a form of free speech.  I cherish my ability to write that Muhammad was, at best, wrong.  At worst Muhammad was a power hungry ruler who cynically found a way around the local politics of his time by forming a religious power base.  These are my opinions.  I may be incorrect about them, but at least I’m free to write them.

Peace be unto her holy hooves.