Skip to content
I was sitting at a table outside of the bookstore in the Riverpark shopping center, enjoying a hot coffee and some interesting conversation with a close friend of mine.

About 50 feet away a charity organization had set up an information table. They had a portable awning over it, and several very large, very slick signs around it. They had a wide screen video monitor playing a revolving advertisement about their charity. From what I could see, it had something to do with golf. Other than that, I ignored them.

Until one gentleman popped up next to my table. He was pretty slick too – business suit, perfect hair, engaging smile. He squatted down at my side, stuck out his hand to me and said, “Hi my name is David. I’d like to tell you about (some program involving golf) that helps (disadvantaged youth)”.

I pointedly looked at his hand, but otherwise didn’t bother to move.

“No thank you,” I said. I turned back and continued talking with my friend, who was just a little stunned at my complete dismissal of David.

Undeterred, David stood up and presented me with a glossy pamphlet. There were pretty color images of kids and golf on it.

“Don’t you want to help (kids with some form of specific problem)?”

“No. I have charities that I give to. When I look for a charity, I carefully research them. I don’t know a thing about your charity.”

“Not unless it has a windmill on the course” I answered.

Again, I turned away and finished what I was saying to my friend. When I looked around, David had gone.

“That was pretty rude” my friend told me.

“Yea, I know. Salesmen can be so pushy.”

I explained to her that this wasn’t the same thing as a non-profit group making a general plea for donations. This was a slick marketing campaign that used professionally made materials and high pressure sales tactics to get donations. I would be astonished if they gave more than 60% of their gains to children in need.

And these were high-pressure sales tactics. I’ve blogged about these before.  David had interrupted a conversation and attempted to get me to participate with him in selling me something I had never heard of and didn’t want.  He assumed the sale was already made, and never asked if I wanted to be sold to.  By holding out his hand, by trying to get me to hold a glossy brochure, he was attempting to hold me “hostage” for his sales pitch.  If I had accepted his gestures then politeness would dictate that I listen to him until he finished his pitch, and then apologize to him for not giving money.

Screw that.  He was being rude for interrupting me, for applying high pressure sales tactics.  He should be punished for his social faux pas, not rewarded for it.  So I did. 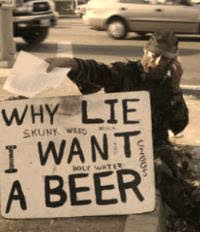 But David isn’t special.  I say “No” to many charities.  I shop at Petsmart and I refuse, every time, to give a dollar to “homeless pets”.  (But if they are a pet… why are they homeless?…)  Every year I refuse to purchase a piece of paper shaped like a balloon, or shoe, or whatever – that is then marked with my name and stuck to the side of the wall in Wal-Mart.  It has gotten to the point that when a cashier says, “Would you like…” my immediate response is, “No.  Thank you.”

I don’t give money to people who ask me for money on the street either.  Although if they say that they are hungry, I offer to take them to a nearby restaurant and share a meal with them.  (Well, if I have money.  When my wife was alive I was usually broke.  Her meds weren’t cheap!)  I’ve shared a couple of meals with some interesting street people – but most refuse.

And I don’t know if this only happens in Fresno or what, but I’m often approached by kids on skateboards who ask for money.  Kids with good shoes, designer cloths, recently bathed… asking for money.  One young gentleman said he’d show me his “best skateboard tricks” for $10.  I told him I’d buy his skateboard for $20.  His reply was colorful and rude, so I would guess that his situation was not very dire.

Don’t get me wrong… I give to charity.  Even when we spent a sixth of my income on prescriptions and copayments for my wife, we still managed to donate over a thousand dollars a year.  But since I don’t have a lot of money, and I do want to make a difference, I try to carefully select those groups where a little means a great deal.

I prefer charities who are part of the Combined Federal Campaign.  I used to get CFC letters when I was in the Air Force that listed CFC charities, and how much each charity spent on administrative costs versus how much was donated.  I never donated to those charities with an administrative cost above 20%.   That’s one of the reasons I stopped giving to the American Diabetes Association.

Won died due to congestive heart failure.  She had diabetes and high blood pressure.  She also loved kids, we both did.  So I used to look for charities in these categories.  Now that she’s gone, I will be donating more to charity, but I’m interested in finding a new charity.  I’ll be looking for someone new.  Maybe even a completely secular charity.

So no.  You can’t have the change that is in my pocket.  But I might invite you to eat with me at Denny’s.