When atheists mention those parts of the bible that are unconvincing, “Jonah and the whale” are a frequent bullet point.  Christian apologists deal with this objection pretty handily.

First, an apologist will point out that it wasn’t a “whale”, but was instead a “great fish”. 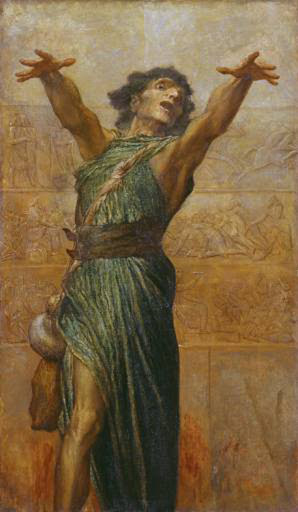 Second, a humongous fish that can swallow Jonah whole, and keep him alive for 3 days is really no problem for someone who believes that God can do the impossible.  From Answers in Genesis:

Could God have prepared a great fish to be in the vicinity of the foundering ship, to scoop Jonah out of the raging sea, transport him to shore and vomit him up?

Absolutely! If He is the all-powerful Creator God, preparing a fish and timing the whole event was not a great drain on His power or ability. He is in no way limited by what He created.

See? God can do anything!  A giant fish is really no problem, and is easily brushed away.  Literalist Christians will insist it was a fish, and those who are slightly less literal will begrudge a whale – but either way, it is not a problem for them.

But to me, the most damaging part of the story is God’s apparent wishy-washiness.  This story would seem to demonstrate that either God is capable of lying to his worshippers, or if he is not capable of lying – then he is unable to see the future.  His omniscience comes into question.

In Jonah 1:2 God says, “Go immediately to Nineveh, that large capital city, and announce judgment against its people because their wickedness has come to my attention.” Jonah, of course, turns the other way and flees.

What was Jonah supposed to say to the people of Nineveh?  Once he arrived, Jonah was supposed to announce that at the end of 40 days the entire city “would be overturned” – which is another way of saying that it would overthrown and destroyed, and has the connotation of destruction by military conquest.  After he got out of the fish, and arrived in Nineveh, Jonah did make this announcement.

Why did Jonah flee, instead of going to Nineveh to make this announcement?  Was it fear of God?  Fear of destruction?  Rejection of God?

No, Jonah was an honest man, a man of conviction who did not want to see himself made a liar.  The announcement he made in Nineveh, the announcement that God had Jonah make, had no qualifiers to it.  He didn’t say, “If you repent now, this fate will pass you by” – no he was very clear.  In 40 days, the city would be “overturned”.  There was no wiggle room.

But the citizens of Nineveh repented in the hopes that this fate would pass them by.  They repented from the King all the way down to the youngest citizen.  They covered themselves in sack-cloth and ashes, and refused to eat – and refused to let even their animals and livestock to eat.

And God stayed his judgment due to their repentance.

And Jonah prayed to God and said, (paraphrased) “This is why I fled, instead of following your instructions to go to Nineveh.  I fled to try to prevent this, because I KNEW you were going to do this!”  Jonah threw a fit over this, and demanded to be allowed to die on the spot.

God then goes through a little morality play in order to tell Jonah that he really doesn’t have a right to be angry.  And that the population of Nineveh, all 120,000 of them, were unable to tell the difference between right and wrong, and therefore deserve pity.

My first thought at God’s response to Jonah is that God isn’t very well versed in human psychology.  Of course we have the right to our feelings – they are ours.  We don’t have the right to act out on our feelings.  Telling us that we don’t have a right to our feelings is a way to make us feel guilty over having such feelings.  But why should I be surprised that God would want people to feel guilty?  That’s the default state of most Catholics!

A little more seriously, my second thought is that God takes pity on the tens of thousands of citizens of Nineveh for their inability to know right from wrong, but has no problem exacting vengeance for the Israelites on the Midianites – including killing every male Midianite – all the way down in age to innocent babies.  Apparently the “gracious and compassionate” “abounding in mercy” God that Jonah whines about in Jonah 4:2 runs out of that compassion for the innocent in Numbers 31.

But what is most striking is the implication of the entire story.  God tells Jonah to go to Nineveh and announce that they are doomed.  And then (due to the actions of the citizens of Nineveh) God changes his mind.

Did God not know he was going to change his mind?  Could he not see the future and see how the citizens of Nineveh would react?  If so, then his command to Jonah was truthful, but his omniscience is lacking.

Could God see what Jonah’s announcement would do to Nineveh?  Could he see that he would choose mercy in the future?  If so then his omniscience is fine, but this shows that God is willing to lie to one of his own prophets.  And if God lies, then everything about Christianity is immediately thrown into doubt.

This is where I get the title of this blog entry.  My New English Translation quotes Jonah as saying, “This displeased Jonah terribly and he became very angry.”  In this context, “This” means God’s decision to show mercy on Nineveh, which has made Jonah a liar.  Another translation of this passage from Hebrew could be, “It was evil to Jonah, a great evil.”  (“It” refers to God’s actions.)

No wonder Jonah was so angry – you would expect a God who is both good and omniscient to be incapable of screwing up so badly.