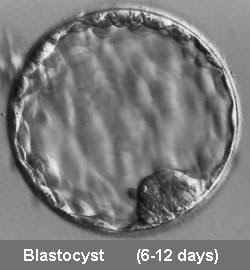 Sometimes I read about atheists who wish to ban abortion. A few have even given their support for a Personhood amendment.
And I have to wonder – have they thought this through?
I will be the first to admit that a fertilized ovum is “human”. But then, so are my skin cells. The real argument is over what is a “person”. I’ll get to that.
First, let’s discuss how we all came to be. (And for you biologists out there, feel free to correct this poor electrical engineer! I’m sure I screwed up something!)
Fertilization is the fusion of gametes, (sperm and ovum) to form a zygote. The zygote goes through “cleavage” (cell division) to form a Blastula. After about 5 or 6 divisions it is called a Morula, at which point it starts to form a hollow ball of cells around a center of liquid. Once the ball is formed it is called a blastocyst. The inner cell mass of this ball starts to form structures that will later define the fetus.
Up to this point, the blastocyst has not adhered to the uterine wall – when it does, it is called implantation. At implantation the cells are called an embryo until about the 8th week, when it is then called a fetus. Implantation happens between 6-12 days after fertilization.
I won’t go into the development of a fetus here.
A baby is what we call a human that has been born. Newborn is the designation of a human from birth to several weeks old, and infant is the designation usually given from one month to 12 months.
Now let’s review miscarriage.
Miscarriage (also known as “spontanious abortion”) is actually very common in humans. Especially before implantation of the blastocyst. There is only a very narrow window of opportunity for the blastocyst to implant, and this window can be affected by various things.
The problem at this stage is that the blastocyst is about 32 cells in size, and if a miscarriage happens it often seems just like a woman’s normal menstrual flow. Sometimes it is thought to be a little heavy, but not always.
No one seems to know the exact rate of miscarriage in humans because it is difficult to identify when it happens.  Depending on who you ask, or which study you read, miscarriage rates are said to be anywhere between 30-50% of all fertilized ovum. (Wikipedia, New England Journal of Medicine, WebMD, University of Ottawa, MedicineNet)
Most miscarriages happen in the first trimester. Miscarriage is less likely to happen in the second trimester or later, and is usually due to problems with the uterus, umbilical cord, or placenta.
What makes miscarriage MORE likely?
There are things that a woman (and even the father) can do to increase the likelihood of miscarriage.
Older parents are likely to miscarry due to poor genetics. Smoking increases the likelihood of miscarriage – even if only the father smokes!  Drug use is also an increased risk (but we knew that, right?) Antidepressants can cause a failure to implant.
IUDs, which mostly prevent pregnancy by preventing fertilization also prevent blastocysts from implanting in the uterine wall. Also in some few cases the combined oral contraceptive pill (the most common birth control pill) will cause the blastocyst to fail to implant.
There are studies that show a correlation between exercise and an increased risk of miscarriage in the first trimester, with more and heavier exercise leading to greatly increased chance of miscarriage.
There are correlations between caffeine use and miscarriage, and stress and miscarriage too.
So what happens if we define a fertilized ovum to be a person?
There is no argument that a baby is a person. Personhood is usually granted after birth. (Although this isn’t always true. In some countries it has been common to not officially acknowledge or even name a baby until a year after birth – due to high rates of infant mortality.)
But what if we grant a fertilized ovum the same rights to personhood that you and I reading this text on a screen enjoy?
If a mother spontaneously aborts, or miscarries, we will need to determine to what degree the mother (and perhaps even the father) is culpable for the death of that “person” in a similar manner that we now do with born persons.
In the death of a non-born person, we must ask:

Depending on how these questions are answered, the woman may be guilty of manslaughter, or negligent homicide. There are already cases of women charged with drug trafficking and child neglect due to their use of illegal drugs during pregnancy.

There are cases where women have been charged with murder for attempting to end their unborn child’s life. Whether the method of murder is a pellet gun or a 10 mile run might not matter.  (Wikipedia)
Obviously, if a fertilized ovum is the same as a person, AND it deserves the protection of the State, then some restrictions must be placed upon women of child-bearing years.
These restrictions might include:

I’m sure other protections may occur to the reader.
Roe V. Wade
So why is Abortion legal? Why did Roe V. Wade make it legal?
One of my religious acquaintances told me that Roe V. Wade was decided in order to allow woman to “avoid the consequences of sex”.
In reality, Roe V. Wade is a privacy issue. It’s about personal liberty. The restrictions that I enumerated above are invasions into a woman’s liberty and privacy. They are a form of tyranny.
A family with two children may decide that “2 is enough” and then use birth control methods to prevent future pregnancy. But not all birth control methods are 100% effective, so it is still possible for the woman to become pregnant again.
Perhaps such a pregnancy will endanger her health, perhaps it will kill her. Or maybe the family is on the financial edge and cannot afford another baby – maybe it cannot even afford a full term pregnancy.
Roe V. Wade recognizes that the mother may decide to have an abortion. The decision made by the Supreme Court recognized that it is her private right to make such a decision. The court also decided that it was better that the mother do it safely, instead of using a risky method.
And risky methods of abortion abound. Ask any woman who remembers what abortions were like before 1973.Women died.
But the State also recognizes that it has a responsibility toward the unborn too. This is why Roe V. Wade talks about the viability of a fetus. If the fetus is viable, it is right to protect it. Viability could be as early as 24 weeks with artificial support.
At 24 weeks the pregnancy is obvious and miscarriage is unlikely to occur.
Last thought: In-Vitro Fertilization
“In vitro” means “within glass” and refers to the fertilization of ovum outside the mother’s body as a treatment for infertility.
Usually several embryos are cultured before being transferred back to the mother. This is done because some embryos are not as viable as others (the best are chosen for transfer back) and because not all embryos will implant in the mother. Usually only 2 or 3 embryos are transferred back to the mother, with others held back until it is known that implantation occurs.
Usually there are several embryos that are left over from the process. These can be cryopreserved, but are often discarded – usually by the decision of the family.
If every embryo is a person, deserving of full rights of personhood, then IVF will need to change dramatically, or be made unlawful.
So, where are you in the debate on abortion?