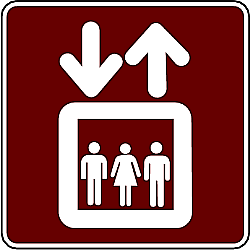 There are those who scoff at the school boy, calling him frivolous and shallow. Yet it was the schoolboy who said, “Faith is believing what you know ain’t so.”
— Mark Twain, Following the Equator, ch. 12, “Pudd’nhead Wilson’s New Calendar” (1897)

Religious people often tell atheists that the atheist position is no better than a religion because it is based upon faith.  (They also often assert that atheism IS a religion – which I think is a sort of “crab mentality” and won’t get into here.)

The problem with saying that atheists have “faith” in things like how an airplane works, or that an elevator won’t kill you, is that it is the wrong term to use.  Yes, it is reasonable to “believe” that an elevator works, but “belief” is not strictly a religious term – you can believe in things for good reasons, like evidence and experience.

I do believe that the next elevator that I step into will work, not out of “faith”, but out of the trust that I place in my fellow humans and in society.

I trust that an elevator works based upon my experience and evidence.  For example, I can watch other people using the elevator, and I have a lifetime of experience with elevators. As a kid, I trusted my parents as they took me by the hand into an elevator and made it work.

If I were very skeptical about elevators, I could run an experiment on the elevator, just by sitting and watching other people go up and down.  I could watch a glass elevator in a mall as it delivers people from one floor to another.  I could talk to the building superintendent about the elevator.  I could examine the inspection sticker for the elevator and then call the phone number on that sticker and arrange to speak with the mechanic that last performed maintenance on the elevator.  I could run a patent search on elevators and find out how they worked.  I could do a news search on elevators that have failed and killed everyone onboard, and then do a statistical analysis of how safe they are.

My belief that an elevator will work is not based upon faith.  It’s built upon the trust I have for the ingenuity of my fellow humans.  My belief is based upon facts that can be tested, experimental evidence, and a wealth of data.

So is my atheism a belief based upon evidence and data?

This is another serious misunderstanding by Christians.  Most atheists lack a belief in any deities because they lack any evidence or data that a deity actually exists!   We lack a belief, which is different than actively disbelieving.

It is logically possible to disbelieve in a deity when such a deity has been described in a certain way.  For example, if you insist your god is perfectly good, and is all powerful and all knowing, then the “Epicurean paradox” shows that such a being is impossible.  If you insist that morality is impossible without your god, then you run into the Euthyphro dilemma.

But if you posit a disinterested deity that started our universe with a “big bang” and then wandered away and has never interfered – well, I’m technically agnostic about that – but just a little bit.  There is no evidence for this position one way or another, so the only honest answer I could have to that is, “I don’t know“.

Does a Christian God exist?  One that is omni(benevolent,potent,scient)?  One that is the fount of morality?  No – I can say for sure that such a deity doesn’t exist due to the dilemma and contradiction created from this definition of “God”.

How about a deity that cannot be detected, does such a deity exist?  Maybe.  The better question is, “would it matter?” A hypothetical undetectable deity is no different than the hypothesis that I’m just a “brain in a vat“, or that the universe was created “Last Thursday“.  All are unproven, and as Hitchens has said,“That which can be asserted without evidence, can be dismissed without evidence.”

This is where parody religions become useful.  If I am supposed to believe in a God that I cannot disprove but lacks positive evidence, then why should I believe in the hateful God of the Bible?  There are other hypothetical deities that meet the same criteria, and the church of the Flying Spaghetti Monster sounds like a lot more fun!

It’s also easy to fall into solipsism while contemplating deities that cannot be falsified.  And my standard response to Solipsists is to kick them in the shins and walk away.  I’ll stick with elevators.  I trust them.