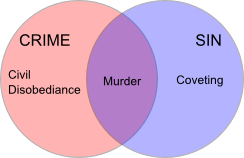 When I say that “Sin” is victimless, the most common Christian response I get is, “But what about murder or theft?  Arn’t there victims there?”

And in trying to explain this to people, I have come to realize that there are two barriers to understanding:

First, we must recognize that Christian views about sin, original sin, hereditary sin, and what constitutes a sin are all over the map.  The field of Hamartiology is the theological study of sin – and it is contentious because the different branches of Christianity can get very quarrelsome over the matter.

Second, in more general terms Christian theologians agree that there is the possibility of an ideal relationship between any person and God, and that sin stands in the way of that relationship, preventing it from happening.

The concepts of repentance of and atonement for sins were introduced in the Old Testament.  And in the New Testament God created a human son (He has/had other non-human sons) who was sacrificed to pay the debt of humanity’s sins to make an ideal relationship possible between humans and God.

But we again come to the question of what is “sin”?

In simple terms, “sin” is those things that God finds repugnant.  These are actions in violation of God’s will, a transgression against divine law.  And since sin destroys the relationship between humans and God, then the victim of sin becomes clear.  The victim of sin is God.

The Bible lists actions that have been deemed “sins” by God or his prophets.  These include murder, theft, and failing to keep the Sabbath holy.

Human societies have defined crimes that are transgressions against other humans or against society and the governement that is part of that society.  Crimes in American society include murder, rape, and polygamy.

Crime is punished (or forgiven) through human law.  Sin is punished or forgiven through God.  These are two different sets, and each set may contain objects that are totally its own, or are shared with another set.  They intersect, but they are NOT THE SAME THING.

Murder is a crime because it has a real human victim.  Murder is a sin because it is a transgression of God’s will as attributed in both the Old and New Testaments – God himself is the victim of the sin of murder.

But what if you are an atheist?

We must all now acknowledge that there has never been a time when any deity has shown up to protest the commission of a sin, except within the pages of a few books that are called “holy” by those who believe in them.

But it does not matter whether you take the bible to be true or take it to be merely a collection of mythological stories. The stories are hearsay and not supported with any sort of clear evidence.

So yes, “Crime” has many demonstrable victims. “Sin” is victim-less – the victim of sin, God, has yet to show himself.