On Sunday, I and another member of CVAAS attended a small meeting with Dr. Ramadan, the Imam of the Masjid Fresno Islamic Center.  Masjid is the Arabic word for “Mosque”.
Dr. Ramadan is a very impressive person.  Born in Egypt, he memorized the Qur’an by the age of 14. (But he told us that his son memorized it by the age of 8!)  He’s a native speaker of Arabic, and his second language is English – which he speaks fluently with very little accent.  He also took 5 years of German, but says he’s not very fluent in that language.  He’s worked as a High School English teacher, and in varying capacities as an English / Arabic translator.  He’s been an Imam at both Stockton and Modesto, and has been the Imam at Fresno for over 12 years now.
Dr. Ramadan is of the Sunni tradition, as is the Mosque.  He didn’t know the overall affiliation of his congregation.
So, let’s get down to the real purpose of this talk.
I asked what he though of the violence in the name of Islam in the Charlie Hebdo murders?
Dr. Ramadan replied that he categorically condemned these killings, and that the murderers were not practicing Islam.  Ramadan quoted Sūrah 5:32:

As a side note – I see a possible loophole here.  An Islamic government could possible declare something to be a “crime that requires the death penalty” – crimes that we in America would not consider to be a crime.
From the Bukhari collection of the Hadith, (Volume 9, Book 83, Number 37), we see that Muhammad said there are 3 legal reasons to kill a person.

Well, item number 3 explains somewhat the very harsh punishment of Saudi Arabia Blogger Raif Badawi for merely criticizing Islam and the Saudi leaders.  It also means that Islamic countries who execute atheists could be following the Qur’an.  Especially if the atheist in question is an Islamic apostate who speaks out against Islam!
I very much appreciate living in a country with (mostly) secular laws that will not execute me for being a Christian apostate!
But let’s get back on topic.
We asked Dr. Ramadan about satire, and images or depictions of the Prophet Muhammad.
He turned it around, and asked if we found it disrespectful if our prophets were objects of ridicule.  Like Moses, or Jesus.  We pointed out that an artist won an award for his scatological depiction of Christ, and no one ended up dead because of it.  We did mention that many people were upset.  We then pointed out that Theo Van Gogh was murdered for his film, “Submission”, which criticized Islam’s treatment of women.  We said this to point out the difference in reaction to perceived insult.
Dr. Ramadan said that wasn’t a proper Islamic response, and took us back to Sūrah 5:32.
We next asked about Islam’s ability to get along with non-Islamic religions.  We pointed out that several religious groups in America were considered heinous,  (we used Westboro Baptist Church as low-hanging fruit as an example).  We pointed out that the correct method of combating words was more words.
Ramadan replied by quoting Sūrah 109:

He interpreted this to mean that Muslims should not criticize other religions.  I would think that this also means that they expect the same courtesy in return – and frankly that is not something I’m prepared to do. No idea is above criticism.  None at all.
Also Dr. Ramadan quoted Sūrah 2, 256 to say that, “there is no compulsion in religion”.  To him, this means that Islam must not compel believers of other religions to Islam. 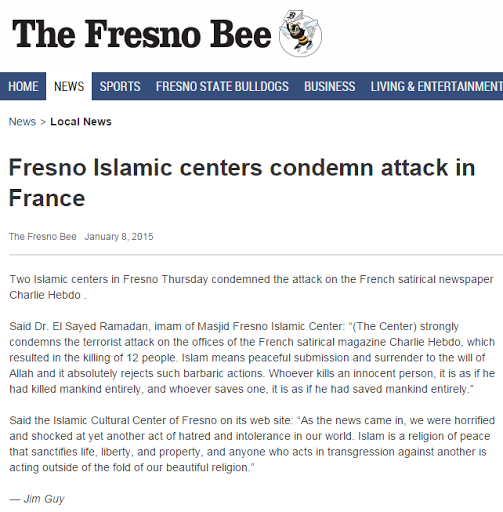 But this seems to be a verse that is taken out of context, and the idea that there is no compulsion to belief in Islam is certainly in dispute!  But we didn’t know about this at the time, and we let this go unremarked.
Dr. Ramadan did arrange a press release with the Fresno Bee, condemning the Charlie Hebdo attacks.  I’ve included that here.  You can click on this image to see it separately, in a bigger more readable format.

All in all, I enjoyed my talk with Dr. Ramadan.  He is a very cheerful, pleasant person.  His knowledge of Islam is impressive.  From our meeting with him, I get the feeling that he is a moderate, and I could hope that Islam was more like him.  However, there are definite cultural differences, and he didn’t seem to understand that freethought requires the acceptance of distasteful speech.
We have been invited to meet again at any time, or to invite Dr. Ramadan to speak at any upcoming CVAAS meeting.  I’ll update if and when that happens!