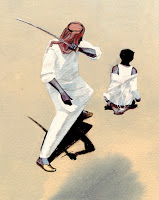 In 2014, Saudi Arabia, one of America’s closest allies, created a new terrorism law.  This law, along with various royal decrees by the king of Saudi Arabia, Salman bin Abdulaziz Al Saud (سلمان بن عبد العزيز آل سعود‎‎) has created a legal framework that criminalizes dissident thought or expression as a form of terrorism.  The punishments are severe.

On January 31, Saudi authorities promulgated the Penal Law for Crimes of Terrorism and its Financing (the “terrorism law”). The law has serious flaws, including vague and overly broad provisions that allow authorities to criminalize free expression, and the creation of excessive police powers without judicial oversight. The law cites violence as an essential element only in reference to attacks carried out against Saudis outside the kingdom or onboard Saudi transportation carriers. Inside the kingdom, “terrorism” can be non-violent – consisting of “any act” intended to, among other things, “insult the reputation of the state,” “harm public order,” or “shake the security of society,” which the law fails to clearly define.

The interior ministry regulations include other sweeping provisions that authorities can use to criminalize virtually any expression or association critical of the government and its understanding of Islam. These “terrorism” provisions include the following:

So you can’t question Islam.  You can’t point out that it is silly, has no evidence to support its claims, and that a secular worldview is a valid point of view.

This would seem to indicate that you are not allowed to immigrate from Saudi Arabia to another country.

Since “atheism” is a form of terrorism, then an atheist club is defined as a “terrorist organization”.  This means that I’m officially a “terrorist leader” due to my position as the president of a local atheist group.

Like sending an email to the American Atheists.  If you are caught doing this, you are also a terrorist!

Good by any sort of gathering to discuss civil rights in Saudi Arabia.  It’s the Kings way, or the chopping block for you!

So by attending an atheist get together, you are a terrorist.

In other words, you are not supposed to encourage any other country, perhaps America, to insist that Saudi Arabia follow basic human rights.

My thoughts on this – I’m the leader of an atheist organization that I helped to form.  I meet with others in this group to discuss various topics.  Some of these include how silly Islam is, and how messed up it is to live in an Islamic society like Saudi Arabia.  I correspond with the leaders of other groups, both large and small.

And I think that King Salman of Saudi Arabia is a big poopy head, and a vile opponent of basic human rights.  I encourage the citizens of Saudi Arabia to overthrow him and install a democratic government.

All of this rates me as a vile terrorist by the standard set in Saudi Arabia.  I should probably not travel there.

I’ll also point out that even though it is banned, there are increasing numbers of atheists in the Islamic world, including Saudi Arabia.  And just like here in America, the religious fanatics are losing their grip on power and they are becoming more fanatic in response.  They are becoming dangerous because they are being cornered.

This is why Islam is dangerous.  Because the Islamic leaders of the world cannot stand to have their religion questioned.  They consider this to be “blasphemy”.