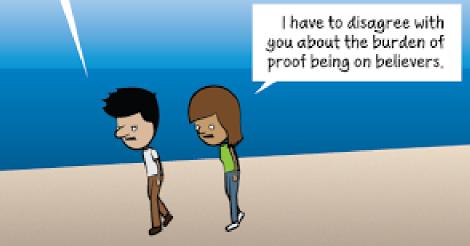 I’ve posted before on the “mixed up burden of proof” and the problems that religious people have with it.  I’ve said before that the burden of proof is always on the person making the claims.

And yet, religious people just don’t get this very simple concept.

It’s come to my attention recently that once again people – especially Christians – are attempting to shift this burden of proof from the claimant to the respondent.

Part of this seems to be due to a persistent “Atheism is a religion” meme.  This is the idea that atheists take the non-existence of a deity on faith, not on evidence, and therefore atheism is no different than a religion.

I’ll freely admit that there are atheists who deny the possibility of any deity or deities.  And I’ll agree that they do so on philosophically shaky ground that leaves them as vulnerable to the charge of “faith” as any religious adherent.

This is exactly why atheists have pointed out the difference between so called “weak atheism” and “strong atheism”, or the differences between explicit and implicit atheism.

Personally, I’m an explicit, “weak” atheist.  I have never found enough evidence to convince me that at least one deity exists, and so I live my life as if no deities exist.  However, I could be wrong.  All it would take to convince me that I’m wrong is sufficient evidence.  And if I received such evidence that at least one deity existed, I would change in a heartbeat to live my life as if a deity existed.

This willingness to change one’s mind when presented with evidence is not a hallmark of religion. 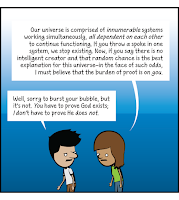 I recently ran into a cartoon by Christian web cartoonist Adam4D, which demonstrates this frantic attempt to shift the burden of proof of God from the Christian to the atheist.

The cartoonist then segways to a teleological argument using the Watchmaker Analogy.  Of course this argument has multiple problems.

As pointed out by judge John Jones in Kitzmiller v. Dover, the argument from design is subjective.  Even Professor Behe couldn’t show that there was any real way of determining something was created through a natural process or through a divine process – only that it “looks complex”.  In other words, it was only through subjective terms that a Christian can claim that a tree is divinely created and a snowflake is not. 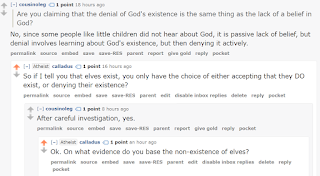 I often hang out in the online discussion forum of Reddit, and recently I’ve again run into a Christian who has tried to assert that atheists are making a positive claim that must be met by a burden of proof.  Like many such discussions, they go nowhere very quickly as the Christian in question refuses to admit that any other response is logical.  (You can click on this image to enlarge it.)

This method is not very reasonable.  The reaction to a positive claim might not be denial that the claim is true, but merely an assertion that the respondent does not believe the claimant.

Or a positive claim could be met with a counter claim that invalidates the first claim.  If it is not the claimants burden to prove that what they say is true, then a counter claim will automatically annul the original claim until it is proved false.

For example, let’s take Adam4D’s original cartoon, and modify it, for educational “Fair Use” purposes.

Here we can see that if the claimant denies his or her duty to prove their claims, then those claims are immediately subject to being countered by an opposing claim – that also is not required to be proved.

Finally, this entire blog post should be completely unnecessary.  I’ve taken pains to write it all out because lots of religious claimants just don’t seem to get this.  Frankly, Christopher Hitchens said it best: