Crooks have been copying money ever since its invention. Ancient gold coins were faked by filling them with lead; counterfeits as simple as a slug were used to defeat older vending machines; and these days fake money is made using printing presses or laser printers.

Machines also exist that will assist in sorting legitimate bills from fake, but these machines are not perfect. The best detection of counterfeit money is still a person who is familiar with currency and pays attention.

And then there is the Counterfeit Money Detector Pen.

This pen, made and patented by DriMark Products, seems to instantly determine the validity of paper currency using a process that is mysterious to most users. A cashier merely marks a bill with this pen, and if the mark is yellowish, amber or clear then the currency is valid. If the mark turns dark brown or black then the currency is phony.

Let me restate that. It is possible that an inexperienced cashier, or one who is in a hurry, will accept counterfeit money as authentic if it passes the ‘pen test,’ even if that currency would clearly be detectable as counterfeit to another person who took the time to examine it. Most cashiers seem to have a blind faith in these pens.

How does the pen work?

As I mentioned, this pen is patented. The patent number is 5,063,163 , and can be seen online at the United States Patent and Trademark Office. According to the patent claims, this pen contains a testing solution comprised of one of several different chemical recipes. The active ingredient is Iodine, and the remainder is one of several solvents.

The patent claims that this solution will detect, “…illegitimate paper currency by detecting the starch content therein in excess of the genuine currency.” It does this using a known reaction between Iodine and starch, called an ‘Iodine Test’.

The Iodine Test is a standard chemical method of detecting starch. Simply stated Iodine reacts with starch to produce a deep blue-black color. (Here is another link for those interested in the chemistry of the Iodine Test.) The test solution in the DriMark pen is naturally a light golden-brown or yellowish color, but when mixed with starch the color changes dramatically to a dark black.

One of the ways that the United States Mint has tried to combat counterfeited bills is to use distinctive paper. Standard paper, like the kind used in a copy machine, is composed of wood cellulose bound together with starch-based glue. Paper used in currency is composed of cotton or linen fabric that has been beaten and cooked to create fine fibers. The process causes the fibers to interlock naturally without the requirement of a starch binding material which makes for a very strong, high quality paper. Paper used for United States currency has other additions, such as tiny red and blue fibers and a plastic / metallic strip embedded in it. Due to the method of manufacture, paper currency will not disintegrate or weaken substantially when wet.

There is very little, if any, starch in American currency.

James Randi has tried to tell people that these pens give a false sense of comfort to those who trust them over all other means of counterfeit detection. He hasn’t had much success in his attempt at education, and I can sympathize. I have also tried to explain to my credit union tellers that they should learn how to use their senses to discover counterfeits. I’m still trying, patiently, to educate.

Mr. Randi isn’t as patient as I am, so to make his point he sometimes withdraws money from his bank, coats it with spray starch, and then returns it. (Presumably he banks at a higher quality establishment than I do, because his tellers don’t seem to check the bills with a counterfeit detector pen.)

I love to read James Randi’s weekly Swift Commentary because I learn so much from him. Perhaps the biggest lesson I’ve taken from Randi and other skeptics is that as a skeptic I’m NOT required to blindly believe what they say. I’m allowed and encouraged to find competing opinions, do my own research, or even perform my own experiments. So in this vein I decided to run my own experiment on the counterfeit detection pen. 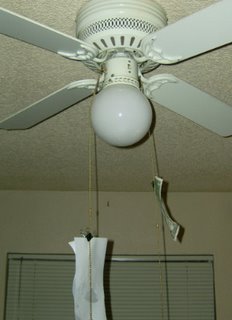 (Right)
Evaporative Rotary
Oscillator.
Not every lab has such high tech equipment!

(Note that I used the word ‘skeptic’ with a comforting smily face on the dollar bill instead of the word ‘fake’ or ‘counterfeit’. No sense in making cashiers nervous!)

This treatment results in a bill that has become ‘slick’ in feel, and somewhat glossy in photos.

The ‘Skeptic’ and smily face became a bit smeared after the application of hair spray. Perhaps I used a bit much?

Mr. Samuel Francisco inspects the experiment and gives it his qualified approval before demanding his payment in tinned cubed chicken bits.

Some types of paper do not contain starch as a binding agent. Since starch is dissolvable in water, I guess it would be bad for coffee filters or paper towels to be held together with something that would cause them to fall apart during their normal usage. It may also be possible that starch would adversely affect the quality of coffee if it were added during the coffee-making process.

Adding starch to coffee filter paper makes it register as counterfeit because the iodine in the detector pen reacts to the added starch.

A dollar bill coated with starch and then sprayed with hair spray will be detected as genuine currency by the pen due to the hairspray barrier between the iodine in the pen and the starch on the bill.

As a side affect, spraying bills with starch makes them feel a little more ‘slick’ to my fingers. Spraying them with hairspray makes them feel more ‘fuzzy’. Under a camera flash they become very reflective, but look normal under regular lighting.

A few weeks ago I made the mistake of leaving my wallet in my pants, which then went through the wash. Luckily I don’t use starch in my wash anymore. (I did when I was in the military.) If you do use starch in your wash, and happen to wash an extra twenty, fifty or hundred dollar bill in your pocket, then you are in danger of having that bill flagged as ‘counterfeit’ by DriMark’s pen. Luckily, you can make your bill ‘good’ again by merely spraying it with hairspray!

Counterfeiters who use a laser printer to print fake bills on computer paper could make all their bills acceptable to cashiers who rely on DriMark’s pen by adding a coating of hairspray.

In my opinion, counterfeit money detection pens are a scam because DriMark can overcharge the user for inexpensive iodine. The price of these pens is much higher than the price of an equivalent amount of iodine.

I purchased this pen for $4 from Office Depot. According to the patent, the counterfeit detector pen is composed of 0.5 to 2.0% iodine. An eight ounce bottle of 10% iodine solution is $12 from Walgreens. If diluted to the proper consistency I predict that the bottle of iodine will be in use long after four DriMark pens have evaporated to uselessness.

I believe that counterfeit money detection pens are a dangerous scam due to the blind faith that most cashiers have in their ability to detect phony money. Counterfeiters who take the time to create funny money will certainly take the time to defeat these pens. I would guess that counterfeiters actively look for cashiers who rely on these pens because these cashiers are an ‘easy target’ for disposing of fake bills.