If you are thirty or forty (or fifty!) something in age, there is an excellent chance that you remember the old “Schoolhouse Rock” educational short films that were shown along with Saturday morning or after school cartoons and children’s programming. If you were at all musically inclined, those tunes have seeped into your life.

Conjunction Junction, what’s your FUNction?
Hooking up words and phrases and clauses.

I can still hear these songs ringing in my head. The Schoolhouse Rock song on the Constitution of the United States allowed me to actually memorize the Preamble to the Constitution, and even now I can write it from memory:

We the people, in order to form a more perfect union, establish justice, insure domestic tranquility, provide for the common defense, promote the general welfare and secure the blessings of liberty to ourselves and our posterity; do ordain and establish this Constitution for the United States of America.

And how about “I’m just a Bill”? That song led me to a greater understanding of the legislative process than anything I learned at C. E. King High School. 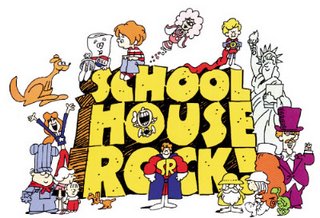 It was the basic hook that I could hang later knowledge from Political Science and American History in college. It was rote memorization, yes, but it was a solid foundation too.

There is nothing really new about using music as an aid in rote memorization. While memorized information isn’t true knowledge, it is often used as the foundation for the building of real knowledge. Kids who memorize the multiplication tables have an advantage in learning Algebra because there is now an area that they no longer have to ‘figure out’ – it is become automatic. Memorizing a process, like the American legal system, is useful to anyone who encounters that process.

It seems like a lot of Americans didn’t bother listening to Schoolhouse Rock – or perhaps as a kid they were caught up in that whole, “I would rather seem cool, than smart” trend that was so popular.

It’s time to wake up Americans. It’s time to crack a textbook on American history or political science because your ‘coolness’ is leading us all into Tyranny.

Kings were Tyrants – absolute dictators who held their position through threat of force and through “Divine Right.” As the Schoolhouse Rock song pointed out:

The current GOP is leading us all into tyranny, into a theocracy little better than “Divine Right.” This is the Divine Right of presidency that is determined to destroy the checks and balances that the founding fathers established in our Constitution so that the GOP can do what ever the hell it wants to do.

It sure screws up the Schoolhouse Rock songs too.

Talkin’ about the government and how it’s arranged,
Divided in three like a circus.
Ring one, Executive,
Two is Legislative, that’s Congress.
Ring three, Judiciary.
See it’s kind of like my circus, circus.

Step right up and visit ring number one.
The show’s just begun. Meet the President.
I am here to see that the laws get done.
The ringmaster of the government.

On with the show!

No one part can be
more powerful than any other is.
Each controls the other you see,
and that’s what we call checks and balances.

Well, everybody’s act is part of the show.
And no one’s job is more important.
The audience is kinda like the country you know,
Keeping and eye on their performance.

Trick question: out of the Legislative, Executive and Judiciary branches of the government, which branch is the more powerful? Answer: None! They Are Equal In Power.

Real answer? They USED to be equal in power – the Judiciary branch is being systematically weakened by the Executive and Legislative branches.

Don’t believe me? Okay, what’s the two things that a President can do with a bill when it arrives on his desk? Schoolhouse Rock answers:

Well, then I’m off to the White House
Where I’ll wait in a line
With a lot of other bills
For the president to sign
And if he signs me, then I’ll be a law.
How I hope and pray that he will,
But today I am still just a bill.

Boy: You mean even if the whole Congress says you should be a law, the president can still say no?

Bill: Yes, that’s called a veto. If the President vetoes me, I have to go back to Congress and they vote on me again, and by that time you’re so old…

Boy: By that time it’s very unlikely that you’ll become a law. It’s not easy to become a law, is it?

The President can sign a bill into law, or veto it and send it back to the house of Congress from where it came. If both houses of Congress then passes the bill by a 2/3 majority the bill becomes law in spite of the President’s veto. (link)

So what is a president to do when Congress can force a law that he doesn’t want? What can a president do when vetoing a bill takes the results out of his hands and passes it back to Congress, out of presidential control?

Instead of a veto, the president can instead issue a “Signing Statement”.

A signing statement was traditionally some sort of political statement, proclamation or rhetoric that a president said to usher in a new law. It was in the vein of, “Today is a great day because…” sort of thing, and really meant nothing. Until Reagan entered office signing statements were used a total of 75 times by the previous 39 presidents.

But a 1986 memo by Justice Samuel A. Alito made the case for “interpretive signing statements.” (link to a PDF of this memo) Alito’s memo spoke about using a signing statement to increase Executive power. During Clinton’s presidency the Justice Department said that a signing statement could be used by a president to object to unconstitutional legislation.

By the time that George W. Bush became President, the signing statement has come to be seen as a type of executive order without congressional oversight; without a check or balance. Dubya uses signing statements as a sort of line item veto – a power that Clinton tried to create but was ultimately unsuccessful.

Congress has no avenue of recourse for a signing statement. A signing statement is more powerful than a line-item veto because it can completely reverse the spirit and letter of the law being signed.

Bush believes in the theory of the Unitary Executive, (which is another mess that has so far eluded the majority of Americans, but affects them deeply) and he uses this theory to limit the power of the Judicial branch. He quotes the Unitary Executive power in his signing statements.

Perhaps it’s time to rewrite the Schoolhouse Rock songs, update them for our more ‘modern’ America to reflect the sort of powers that really exist. I guess they can talk about a “Two Ring Circus” for a while – at least until Congress is gutted. They can certainly speak about the apathy that Mr. Bill would feel about becoming a law whose meaning is ultimately shaped by the President, not the Congress.

We’ll probably have to add a whole new song about the divine right of the Unitary Executive.