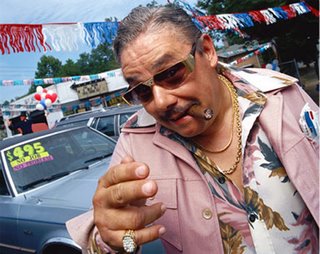 I was a new Freshman at my high school, a little lost and trying to stay out of the way of the upper classes. I had friends, but I was fairly shy and not very popular. (That’s an understatement, I was a nerd.)

I had made the acquaintance of another boy in one of my classes who seemed a little more outgoing than I. After a couple weeks of talking at school he invited me for a youth party at his church. I was very active in my own church; First Christian Church, Disciples of Christ – and we had an active youth group where I had made friends, so this just seemed like a good way to expand my circle of friends.

I made sure that my acquaintance knew I was already baptized, ‘saved’, and an active member of my own church and was therefore not interested in changing churches. He assured me it was just a night where young people could get together, nothing more. He made it sound good, with games, pizza, even a little magic show – and the possibility of maybe meeting a girl. I was hooked.

At the party there was a sort of narthex / large common room that we all met up in, and it had pizza already laid in. I had a slice and started trying to meet people. I met a few, but really didn’t get to know anyone in detail; a lot of them were older than I. There was a lot of aimless milling about and I kept comparing the experience to my own youth group where we knew each other and had no problem finding something to do or talk about.

Finally after things started getting uncomfortable and I started thinking about going home, a jovial adult showed up and started in with some directed activities – mostly the sort of thing that adults are sure kids will love, but kids put up with in poor grace. The only thing that stood out is the card trick the adult showed us – a “guess the card trick” where he called an accomplice by phone and had him guess the correct card. Not bad actually – I figured it out later.

And then he started preaching. It was exactly what I had feared, what I had asked my acquaintance to promise me would not happen. Don’t get me wrong, the preacher was good, and he laid the emotion on thick.

By the time he was done we were all glad to be in a church, and more than a little nervous. It wasn’t quite fire and brimstone, but we all now felt our mortality. As he stopped, he called us into the chapel where a woman was set up with a small band. She continued preaching a little, and made us all feel very good – and then she started singing in a beautiful voice and caught us all by our heart strings. By the time she had finished, we were all teary-eyed.

Then the preacher called us up to be saved, “Anyone who wanted to be saved by Jesus.” And the kids lined up in front of the altar. I told my friend I was already saved, and that I didn’t need to be again – he pointed out that I was the only kid left sitting. And so, reluctantly I got up and got ‘saved’ again. Not by a baptism, or a blessing as I had thought, but by writing my name and address on a ‘confirmation card’ of some sort. By the time I finished writing I was ready to go, and left as soon as it was polite.

The next day, I told my friend / acquaintance, and soon to be ex-friend that the so called ‘party’ wasn’t what he had led me to believe. It felt more like a cattle-call, it felt more than a little dishonest. We didn’t speak after that and I really have no idea what became of him – he fell below my radar for the rest of high school.

The following Monday I found a letter from his church in my mailbox. Inside was a form letter written by the church pastor which welcomed me, AND MY FAMILY to the church! It even gave a date and time that I, along with my family, would be baptized! And that was what the ‘confirmation card’ was all about.

This was the first time I was ever shown a ‘bait and switch’ by a church – and the lesson stuck for the rest of my life. At the time the lesson was that ‘bad’ churches were little better than cults, and would try to trick you into joining. The lesson included that I be more careful in vetting the so called ‘parties’ to which I was invited, and definitely it included never giving my full name and address in writing to anyone who I did not absolutely trust.

That lesson has changed little over the years. I still think that ‘bad’ churches are little better than cults, but now I realize that most churches are not completely opposed to a little ‘bait and switch’ membership tactics now and again.