Hi! If you’re reading this article from the Michael Thomas Art History Class 101 website located at allpoetry.com, then I’d like to point out that this article, written and copyrighted by me, Calladus, is being copied by linking – which is a form of plagiarism.

Since the Michael Thomas Art History Class does not seem to mind plagiarism, then I would assume that if you are a student in this class, you would be allowed to do the same.

Jules Joseph Lefebvre (1836-1911) was a French Academic painter. Although born as the son of a Baker his parents supported his artistic talents and sent him study in Paris at the age of 16.

He won second place at the age of 23, and two years later he won the Grand Prix de Rome, winning his scholarship and assuring his reputation as an artist.

Although Lefebvre became fascinated with Italian masters and the female nude, his approach to painting continued to be traditionally formulaic until the age of 30, when his painting “Cornelia, Mother of the Gracchi” received extremely poor reviews. A second blow came when his parents and one of his sisters died that year, sending Lefebvre into depression and withdrawal from painting.

He came back to painting with a whole new attitude, and set aside the formulaic approach in favor of a more precise rendering from life. His new style won him praise when he exhibited “Reclining Nude” at the Salon de Paris. His exhibited his first really successful painting, an allegory of “Truth”, at the age of 34; which resulted in his award of Officer in the Légion d’honneur.

Lefebvre became famous for his beautiful nudes, rivaling the works of Bouguereau. 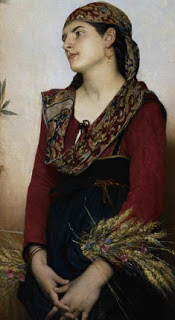 He became a teacher at the atelier Academie Julien sometime in the 1870s where he trained both men and women artists during a time when women were not allowed into French national schools of art. He taught his students the precision of life drawing that had won his own success. Lefebvre was especially admired among American students who sought him out above other Paris teachers.

Lefebvre’s honors increased – he won the Grand Prize at the 1889 World’s Fair (Exposition Universelle of 1889, the Eiffel Tower was constructed for this fair.) He was then made a member of the national French Academy; and he won the title of Commander, previously Officer, of the Légion d’honneur.

Although I have all of Lefebvre’s paintings that I can find in digital format, the first painting I’ve displayed is his “Portrait of Julia Foster Ward”. (As usual I’m displaying cropped details, click on the paintings or the links to see the full painting.) I absolutely love the detail in this painting, and I just wanted everyone to see it first. The flowers in her hair are Morning Glories, and the fine details in her dress are just amazing.

The second painting I’m displaying is another favorite of mine, “Mediterranean Beauty”, also because of the wonderful detail in the painting.

Okay, because I know at least a few of my readers will be curious, I’ll link to two of my favorite nudes painted by Lefebvre. My very favorite is “Odalisque”, although “Mary Magdalene in the Cave” is a close second. I think. Maybe it’s the other way around. Uhm. It’s so hard to decide.

I think I’ll go review them again, just to be sure.