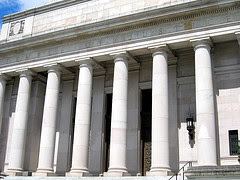 In July of last year two court cases about gay marriage that took place in separate counties of the state of Washington were decided together by the Washington State Supreme Court.

The Washington Supreme Court denied same sex marriage – but it was a very close thing. Out of 6 justices presiding there was a 3-3 split of opinion, with the lead justice breaking the tie.

But the reasoning given for the denial was absurd!

In the lead opinion the reason for denial of same sex marriage is discussed as:

We conclude that limiting marriage to opposite-sex couples furthers the State’s interests in procreation and encouraging families with a mother and father and children biologically related to both.

And their conclusion is stated as:

The question we resolve today is whether the legislature may limit the definition of marriage to include only heterosexual unions. The case law that controls our inquiry compels our conclusions.

The issue of same-sex marriage has been the subject of intense debate throughout the nation. Although times are changing, the plaintiffs have not established that as of today sexual orientation is a suspect classification or that a person has a fundamental right to a same-sex marriage. Thus, the State is required to demonstrate only a rational basis to justify the legislation. Under this highly deferential standard, any conceivable state of facts providing a rational basis for the classification may be considered. The legislature was entitled to believe that limiting marriage to opposite-sex couples furthers the State’s legitimate interests in procreation and the well-being of children.

So the justices are saying that it is in the State’s best interest to deny same sex marriage because it is best that only opposite sex couples procreate and raise children that are “biologically related” to both parents.

This is an ill-thought out ruling that leaves holes large enough to lead an elephant through.

In an attempt to show just how stupid this ruling is, the Washington Defense of Marriage Alliance (WA-DOMA), a pro same-sex advocacy group, formed late last year. Their goal is to show the errors in the Washington Supreme Court ruling by attempting to pass laws based on that ruling. The first of these laws is to force new marriages to produce children within 3 years or face annulment.

WA-DOMA fully expects these laws to be overturned as unconstitutional, and by doing so they hope to show via an almost Socratic method the full stupidity of the initial ruling.

The organizer of WA-DOMA is Gary Gadow, who in an online statement gives their group’s strategy as:

Over the next few years, we will propose three initiatives to the people, each focusing on a different aspect of Andersen. The first initiative will make procreation a requirement for legal marriage. The second would prohibit divorce or separation when a married couple has children together. The third would make having a child together the equivalent of marriage.

The first of these initiatives is Initiative 957. This initiative was filed in January and accepted by the Washington Secretary of State as part of the filing process. Supporters of this initiative must gather 224,000 signatures by July 6 in order to put it on the November ballot. According to the text of this initiative, if it is passed it will:

I think the WA-DOMA group may be overly optimistic in what they can do here, although I applaud their efforts. At the very least, their initiative has generated discussion about same-sex marriage. However I can’t help but see the obstacles that they must overcome to achieve their goals. First, they have to collect enough signatures to get this on the ballot – I think they will be able to do so, but it might be a bit iffy – they don’t have much time in which to work.

Next, they need to have this voted into law by the Washington voting public. I don’t think that will happen. There will be a Christian “Swift Boat” campaign against WA-DOMA and Gary Gadow. Religious conservatives will all point out that this is designed as a ‘slippery slope’ campaign in order to “destroy Traditional Marriage”. I have no doubt that Christians will be quick to equate this initiative with the destruction of marriage – I also have no doubt that they will lie about its content.

Let’s face it, when it comes to the advertising campaign leading up to the November election, the religious conservatives will use their deep pockets to create a campaign blitz against this. This initiative won’t become law, it won’t be overturned by the courts as ‘unconstitutional’, and therefore it won’t become a legal stepping-stone toward same sex marriage.

But it is still valuable in generating discussion, and therefore I think it still worth-while that WA-DOMA try it anyway; sometimes it is noble to tilt at windmills.

This whole argument interested me enough to examine my own state laws on marriage. I found some interesting statements in the California Family code. For example:

Family Code Section 420 ( c ) No contract of marriage, if otherwise duly made, shall be invalidated for want of conformity to the requirements of any religious sect.

Which means that California really doesn’t care what your church says, if the state thinks a couple is married, they are married – be it in a church or by a Judge. Since I am myself ordained as a minister through the Universal Life Church, I could preform marriages myself – as long as the couple has their required marriage licenses, the marriage is preformed in front of witnesses, and I fill out and turn in the required paperwork afterwards. (And if anyone is interested in getting married by me, send me an email and we’ll work it out. If you’re local to me, I’ll only charge for the costs required by the state of California, if any.)

Family Code Section 352. No marriage license shall be granted if either of the applicants lacks the capacity to enter into a valid marriage or is, at the time of making the application for the license, under the influence of an intoxicating liquor or narcotic drug.

“Lacks the capacity” seems to mean ‘mental capacity’, but it is worded so that it could be more broadly applied, especially when you use the words ‘valid marriage’. What is a valid marriage, exactly?

Family Code Section 308. A marriage contracted outside this state that would be valid by the laws of the jurisdiction in which the marriage was contracted is valid in this state.
308.5 Only marriage between a man and a woman is valid or recognized in California.

This seems pretty clear – the only valid or recognized marriages in the state of California are between a man and a woman, regardless of the laws of the state that you were married in.

There is another qualifier too, only certain people are allowed to receive a valid marriage license:

302. (a) An unmarried male or female under the age of 18 years is capable of consenting to and consummating marriage upon obtaining a court order granting permission to the underage person or persons to marry.
(b) The court order and written consent of the parents of each underage person, or of one of the parents or the guardian of each underage person shall be filed with the clerk of the court, and a certified copy of the order shall be presented to the county clerk at the time the marriage license is issued.

So to be legally married in the state of California you must be capable of consummating your marriage. I find it interesting that a provision has been made to allow for underage marriages – I have never heard a peep from California conservatives trying to stop this practice, so I guess it is Christian to allow your 15 year old daughter to wed her 40 year old boyfriend; as long as her parents consent. I wonder how this works with the laws about statutory rape?

Still, the “capable of consummating” clause seems interesting. What if you are incapable? Does extreme erectile dysfunction disqualify you from ever getting married? What if you’ve suffered an unfortunate accident?

What if you were born in such a way that you are never able to consummate your marriage? There are hundreds of thousands of Americans who are born in such a way that they will never be able to consummate their marriages, they may live as a man or a woman – and even have such stated on their birth certificates – but they are more complex than that. These people still fall in love, and live in committed relationships. Some of them adopt children, a lucky few are able to have their own children through the use of technology and a surrogate parent – but there is no way that many of these people can “consummate” their marriages in any way that would be deemed as ‘natural’ by religious conservatives.

I still don’t buy the garbage that conservatives, religious or otherwise, are trying to push about marriage. I have yet to read any peer-reviewed, scientifically accepted reasoning why same-sex marriage should not be allowed, or why it is harmful to standard marriage. I’ve yet to find any convincing argument against granting same-sex marriages the same rights and benefits as heterosexual marriages.

Someone tell me please, why is a loving, dedicated same-sex relationship of 10 years more damaging to marriage than the antics of Brittney Spears or Ted Haggard?