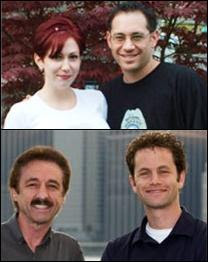 Unless you’ve been buried under a rock for the last week, you have probably heard that ABC news will host a debate over the question, “Does God Exist?” The debate will feature Kirk Cameron and Ray Comfort of the Calvary Chapel Fellowship versus members of The Rational Response Squad, a non-believer activist group associated with Brian Flemming of the movie, “The God Who Wasn’t There.” This group also posted the very successful “Blasphemy Challenge” on Youtube.

ABC doesn’t say which members of the Rational Response Squad will debate, but they do post a photograph of Kelly and Brian. (At least, I think it’s Brian. Anyone know?)

Although it was first billed as a “Live Debate”, now according to the ABC News website the debate will merely be posted to the ABCnews.com web site on Wednesday, May 9th at 1:00 PM (which timezone isn’t mentioned). Wednesday night, ABC “Nightline” will air a segment from the debate.

I guess the question of eternal salvation or damnation isn’t enough to earn a full slot in ABC’s programming.

The Fresno Atheist group are discussing getting together to watch the debate.

I’m most interested in the comments to the announcement of this event on ABC’s website. Reading through these comments leads me to believe that the average religious commenter hasn’t thought things through very well, if at all. I thought about commenting there myself, but didn’t want to go through the hassle of signing up. Also, I didn’t think my comments there would do much good – I would be speaking to an entrenched religious position where many of the people don’t bother using logic or basic intelligence to back up their assertions.

But I do want to show my readers what people commenting to this announcement use as arguments to convince non-believers like myself. So I snipped out some of the more interesting statements and I will reply briefly to them here. Click “Read More” to see them.

But I don’t believe that God or gods do NOT exist, I just don’t bother to believe that they DO exist. I do not DIS-believe, I merely LACK belief. One is active, the other is the act of passively waiting for evidence.

This is a great question. Social scientists have been making a lot of great strides in answering the question of evolved human morality lately. Studies of Bonobo and Chimpanzee tribes show that individuals of these species have systems of morality that are, in many cases, similar to our own. Which leads to an interesting question, do monkeys go to Heaven?

This is a non-sequitur. The second sentence does not follow the first. The first statement is easily disprove. I exist, I’m an Atheist, therefore Atheists exist. The second statement is also logically unsound because it does not take into account the possible existence of other Gods. The non-existence of the Invisible Pink Unicorn also cannot be proven.

In other words, all complex items must have a maker. Who is God’s maker?

Oh for crying out loud. What a lousy argument! Of course I can feel the wind, I feel it on my skin, I can measure it, I can even create it with a fan. How this is supposed to lead me to Jesus I really don’t know!

You’ve been reading too much Jonathan Wells. Science is self-correcting. Unfortunately Christianity keeps spitting out the same tired old lies. Check out this link. (Talk Origins)

I completely agree! You are just being selfish by not opening your heart and just BELIEVING in Allah!

Sorry, you’ve confused faith with trust. Two different things there. I trust the sun will come up today because I’ve got 45 years of evidence that it has done so in the past. I trust my car will run today because it was running fine all week. I trust a restaurant because if they break my trust they will lose business – and may even be subject to legal penalties. I place my trust in evidence, as do you.

So since no one found his body, he existed? Hey, maybe if his body wasn’t there, perhaps it was never there?

Two parts to this. You realize that different Christian religions believe in bibles with a different number of books in it, right? Second, Pascal’s wager is a poor wager. What if I believe in God and go to the Islamic hell? Shouldn’t you hedge your bets by believing in Allah too? Of course, the two religions are mutually exclusive, so worshiping them both won’t work.

Wow, I guess being insulting to Atheists is the “Christian” thing to do. I would like to point out here that many non-believers in history who refused to accept this gift were tortured or killed. I’m so glad that modern Christians have changed tactics and decided to pray for me instead of using red-hot pincers on me.

Well, perhaps because cults seem to prey on those of us who have hit low points in our lives. It’s a good way to win recruits to your cause. Of course, Atheists do help those in need. We just don’t see the need to crow about how much help we’re giving.

Sorry?! You should be! Theories (not LAWS) show that particles are somewhat random and chaotic at a quantum level, but at a higher level they lead to forms of matter that are self-organizing. Given enough energy at the starting point, matter will continually, predictably, self-organize into forms of higher complexity. Go take a basic physics or astronomy class!

Insults again. It almost sounds like you’re saying that God exists because I deny his existence – wow, that’s power! Atheists created God! Anyway, your argument is so poorly stated that I really don’t understand it.

Yes, like the Shroud of Turin. Or a chunk of Noah’s Arc. Great evidence there. Hey, I’ve got an idea, since Peachtree Street in Atlanta Georgia is shown to exist, isn’t it evidence that Scarlett and Rhett Butler’s house existed too? Have I just proven that Scarlett O’Hara, from the book “Gone with the Wind” actually existed? Or wait a minute, what about London England – isn’t that proof that Harry Potter exists? The Bible does hold archaeological truths, but so does much fiction.

Dear Christian: First point, use a good word processor – it will help with your capitalization mistakes. Second, I’ve seen my wife’s brain – via CAT scan and MRI. Oddly I wasn’t able to see her soul. Lastly, which Hell are you referring to? There seem to be many – and no way of choosing the correct religion to stay out of Hell.

And yet others with similar (and better) qualifications than yours have gone the other way. Odd that. As for a “sound mind” evidenced by your degrees, I know of several people who are well educated and still mentally impaired. Also, even if you come to the scientific conclusion that there must be A god, you still must prove that said god must be the Christian god.

You really got me there. Oh, maybe not – check out this link, or this one. Wow, there seems to be quite a few saviors of virgin birth who were resurrected after death – it’s almost like a common story told over and over, hundreds of years before 33 AD!

And I have a friend who was changed by converting to Islam, with 100% positive results. You have a point? Oh, and by the way, what exactly is a “True Christian”? All of you Christians seem to point fingers at each other and declare each other to be false. Who is an Atheist to believe?

Does anyone out there have any better arguments than these? I’d love to hear them! I certainly hope that Ray Comfort and Kirk Cameron come off better than this.

But I don’t expect them to do so.