Alice laughed. ‘There’s no use trying,’ she said: ‘one CAN’T believe impossible things.’

‘I daresay you haven’t had much practice,’ said the Queen. ‘When I was your age, I always did it for half-an-hour a day. Why, sometimes I’ve believed as many as six impossible things before breakfast.’

– Alice and the White Queen, in “Through the Looking Glass” by Lewis Carroll

Truth, and whether or not lies are sanctioned by Christians, has been in the news (and in my blog) lately.

Pontius Pilate asked Jesus, “What is truth?” (John 18:38). The question is a good one. Must Christians always tell the truth, are they allowed to lie. Must they always follow the Christian equivalent to Kant’s categorical imperative – that no lie is ever a moral good?

Categorical imperatives are hard to follow in real life because polite lies often serve as a social lubricant to prevent hurt feelings. If you don’t want to tell your boss that his new tie looks like something he pulled off of a hobo, you could instead say that it is, “certainly unique”. But a lie is not merely an untruthful statement. A person may lie by misleading another into believing an untruth without ever making an untruthful statement. A person can also lie by omission, by not telling the entire truth.

Misleading and lying by omission are used in Ray Comfort’s “Way of the Master” method of evangelizing to save the unsaved. This method is based upon the Ten Commandments and is geared toward evangelizing to non-Christians. As Comfort has said:

It really doesn’t matter if someone says that he doesn’t believe that the Bible is the Word of God (or that they don’t believe in Hell or Judgment Day). If I have rightly used the Law (the Ten Commandments — to bring “the knowledge of sin”), I merely say, “It doesn’t matter that you don’t believe the Bible. You still have to face God on Judgment Day, and you’ve admitted that you are a liar, a thief and that you have committed adultery in your heart.” His conscience will affirm the truth of the Commandments, and the Holy Spirit is faithful to bring conviction.
[emphasis mine]

But the Ten Commandments only forbid perjury, one type of lie (“ ’ed shaqer” means “a lying witness” – Exodus 20:16). Comfort doesn’t mention this, so is he lying in order to save the unsaved? Before I answer I’ll point out that in his writings Comfort mentions Revelation 21:8, which says, “All liars will have their part in the Lake of Fire”.

I reviewed Comfort’s evangelistic / sales technique on my “Part Two … Way of the Master” post. You can read that, or just take a look at the “Hollywood Blasphemy” video that I referenced in that post. In answer to whether or not Ray Comfort is lying during his evangelism technique, watch the video starting at 8:35. Comfort confronts Jessica at this point using the Ten Commandments. He distinctly implies that the commandments forbid lying. This is because it isn’t convenient for Comfort to get into a discussion about the difference between perjury and lying at this time, so he uses a common misconception about the Commandments in his favor. Technically this is a lie, and no matter how much slack you’re willing to cut Comfort, Kant would call him a liar, who tells lies when it is convenient.

What does Jesus say about lies? 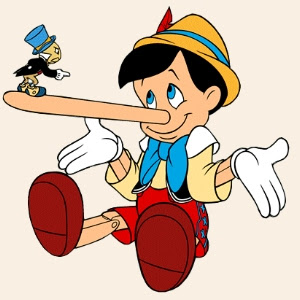 Truth is often mentioned in the Gospels, usually when Jesus says “I tell you the truth” or some variant. Jesus had the chance to clear things up and say, “don’t lie”, but instead he quotes the Ten Commandments and says, “do not give false testimony”. (Luke 18:19) Perhaps Jesus realizes that abstaining from all lies is an impossibility. Perhaps, like Ray Comfort, it just wasn’t convenient for him to get into a long philosophical discussion while he was busy trying to save souls and spread the God’s word.

However there is a way for Christians to lie, without guilt, without the worry of sin, without feeling the threat of God’s punishment – Christians are always allowed to lie to themselves as long as they believe in the lie as if it were true.

The best example of this are the “Statements of Faith” and sworn oaths provided by some religious organizations, such as the Institution of Creation Research, the Creation Research Society, or Moody Bible Institute. A good example is the Answers in Genesis Statement of Faith, item (D)6.:

No apparent, perceived or claimed evidence in any field, including history and chronology, can be valid if it contradicts the Scriptural record.

This effort to turn the bible into a science textbook would be laughable if the consequences were not so grim for society. It has led to religious protest against everything from Benjamin Franklin’s “lightning rods” to organ transplants. When honestly compared with a science textbook, the Bible is clearly deficient. As Sam Harris put it:

Why doesn’t the Bible say anything about electricity, about DNA, or about the actual age and size of the universe? What about a cure for cancer? Millions of people are dying horribly from cancer at this very moment, many of them children. When we fully understand the biology of cancer, this understanding will surely be reducible to a few pages of text. Why aren’t these pages, or anything remotely like them, found in the Bible? The Bible is a very big book. There was room for God to instruct us on how to keep slaves and sacrifice a wide variety of animals. Please appreciate how this looks to one who stands outside the Christian faith. It is genuinely amazing how ordinary a book can be and still be thought the product of omniscience.

A statement, or oath of faith is how Creationists lie to themselves based on a fallacy of foregone conclusion – starting with a sworn conclusion requires believers to reshape or reinterpret reality until it conforms to the said conclusion. Whether “Creation Science” is real or not no longer matters because a statement or oath of faith signifies that Truth has been hijacked by belief.

Based upon this foundation Creationists have become experts at “Quote Mining”, making misleading statements about scientific findings and omitting those findings that contradict established dogma, all while avoiding, as much as possible, out and out lies. By starting a process with a foregone conclusion there is no way anyone could truthfully call that process a valid form of scientific inquiry.