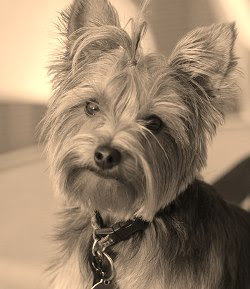 I’d like to tell you about some dogs I owned.

Barnie was my little Yorkshire Terrier. He was a great little dog that was my “inside dog”. He lived in the house with me. He loved to play fetch, and would bring back his little rope chew toy over and over, begging me to throw it again. He could do tricks, like sit and shake “hands”.

Hakim was my Kangal Dog, which is a large breed dog. And he was big too! He had this deep “Woof” that would alert me to intruders (which in all honesty was usually the mailman). Hakim was too big to be an inside dog, so I kept him outside.

Actually, I never really played with Hakim, and I never bothered to train him. I loved him dearly, but I was just too busy. But my next door neighbor asked me early on if he could play with and train Hakim and since I’m a busy guy I thought that would be great. So John (that’s my neighbor) taught Hakim to sit, to stay, and some other tricks that I wasn’t really interested in, but it kept Hakim happy. John also kept Hakim’s dog dish full of the food that I bought, and every now and then I’d toss a doggie treat out into the backyard for him through the kitchen window, just to let him know I loved him and was thinking of him.

There finally came a day when I had to go out of town on a business trip. I asked John if he could watch my dogs, but John said the timing was all wrong – he was just starting his second honeymoon. I would have to hire a kennel to watch my pets.

Since I loved both of my dogs, and since I could afford it, I found one of those doggie resorts for my pets. You know the kind of place? It’s full of romping, playful dogs, caring and attentive attendants, lots of doggie toys and treats, and even a doggie swimming pool! It was expensive, but my babies were worth it! At least, I thought they were worth it…

When I was getting ready to go, I opened the back door and called to Hakim to come inside. But he just growled at me! I had to tell him “No!” in a stern voice, and I finally had to go out and pull him inside by his collar! He protested all the way in.

Inside the house Hakim barked at Barnie, who ran away and hid. I told Hakim to sit, like my neighbor John had taught him to do, and he did sit, but reluctantly.

I had to dig Barnie out from under the couch and I put on his little leash. Then I tried to put Hakim on his brand new leash and he tried to bite me! He actually tore the sleeve of my shirt! By this time Barnie had started barking at Hakim and I had to calm him down. When I turned around to deal with Hakim again, I found out he’d both peed and pooped on the living room carpet!

Oh that just tore it! I thought John said that Hakim was a good dog? That Hakim had manners, and was well trained? Obviously this wasn’t true, he wasn’t even housebroken! Right then and there I decided I couldn’t keep Hakim anymore. So I got on the phone and canceled Hakim’s reservation at the doggie resort. Then I got a muzzle and muzzled him, and tied him with rope just so I could get him into the backseat of my car.

I dropped Hakim off at the pound on the way to taking Barnie to the doggie resort.

I really loved Hakim as much as I loved Barnie. But he didn’t follow my rules, so I couldn’t keep him anymore.

I know if Hakim could talk he might protest being taken to the pound. “How would I know who you are?” Hakim might say, “After all, I was raised in the backyard by John, not in the house with you!” But that sort of protest just doesn’t wash with me. I gave him plenty of clues that I was around! Where did he think all those doggie treats came from? It’s his fault that he ended up at the pound, and it just breaks my heart.

I really do love dogs. And I love the Kangal breed. I think I’ll get a new Kangal puppy and let my neighbor John raise it in the backyard. I’ll call the puppy Umar and toss him doggie treats from out of my kitchen window.

And Umar better know who I am! Just because he was raised in the backyard instead of inside my house isn’t any excuse for not knowing me!

Okay, this was a parable. I would not think very highly of anyone who raised dogs in this manner. I wouldn’t think they were loving or moral – instead I would think them to be indifferent at best, or evil at worst.

If this isn’t a good way for a person to raise dogs, then why is it considered an acceptable way for a god to raise humans?