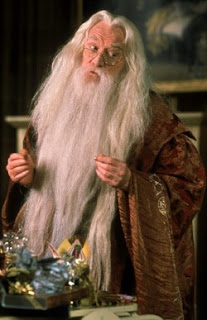 I just got an email from that ironically named group, Americans for Truth, wherein the writer Laurie Higgins asserts that J.K. Rowling is part of the Great Gay Conspiracy because of her identifying the Headmaster of Hogwarts in the Harry Potter book series as gay.

But before I get into that, I’d like to take a moment to point out something that I find a little weird. On the Americans for Truth website, Laurie Higgins is described in this manner, “Laurie Higgins works full-time in a suburban public high school writing center in the Chicago area”. I found that an odd way of describing Laurie’s job – what is this job? Principle? Head Janitor and Bottle-Washer? A little Googling shows that Laurie Higgins is a full-time teacher’s aid at the Deerfield High School’s Writing English Resource Center. Teacher’s aid is a good and honorable job, so why is AFT so circumspect in their description?

As for the message, Higgins believes that J,K. Rowling’s outing of Dumbledore confirms the strategy of “The gay manifesto,” which Higgins believes is detailed in the book “After the Ball” written by Kirk and Madsen. (Amazon) This book talks about using advertising methods to manipulate public opinion for the benefit of the LGBT community, and would be a serious accusation against the Gay community if anyone had actually read it. The Amazon sales rank of #764,153 shows that almost no one has actually heard of this book, and weakens Higgins argument that the LGBT community is deliberately promoting “deviant” or “subversive sexuality”.

This is a common part of the philosophy of the more rabid of the fundamentally religious organizations – that Gays “know” that what they do is morally wrong or “deviant”. People with this sort of philosophy believe that the LGBT community deliberately tempt young people into “perversion”, and if Gays would just get back into the closet where they belong then all our young boys and girls would grow up to be heterosexual.

Best estimates of population indicate that between 3 & 6 percent of the adult male population is homosexual. This doesn’t seem to be affected by any other factor – such as a Christian household vs. a house with same sex parents. The only difference seems to be that as people become more accepting, young gay people feel more comfortable in coming out. It would seem to me that growing up in an accepting environment as opposed to a hostile, or suppressive environment is better for a person’s mental health – but hey, I’m not a psychologist.

The comment that I found most telling in the Americans for Truth email is the one that AFT highlighted. I’ll quote the whole paragraph as written:

Another problematic way by which cultural values are being transformed is through the exposure to the stories of suffering shared by homosexuals and those who experience the psychological disorder of transgenderism. It is not uncommon in public high schools for LGBT (lesbian, Gay, Bisexual, Transgender) students to share their stories of suffering with their peers. The result is that children, teens, and even adults who, of course, do not want to increase the suffering of others, retreat from making moral judgments. In so doing, they fail to make the critical distinction between suffering that results from harassment or abuse, and discomfort that results from an encounter with reasonable judgments about morality.

Ah, so it is “suffering” if it comes from harassment or abuse, but it is merely “discomfort” if a preacher exclaims that an LGBT youth will burn in Hell forever for acting out their sin of being attracted to the same sex? It is merely “discomfort” for religious communities to force LGBT people back into the closet, or when they assert that homosexuals are “morally wrong”, “deviant” or “perverted”?

There are two problems with this sort of argument. First, the fundamentally religious are not interested in being accepting, except under their definition of acceptance. This leads the religious to promulgate the idea that homosexuals should have fewer rights than heterosexuals. I’m not talking about the right to marry here, I’m talking about the right to hold political office, or the denial of some jobs to homosexuals (such as Teacher) or the restriction of homosexual freedom of speech. The religious are only interested in converting homosexuals into heterosexuals, or in shutting them up. And Higgins calls this, “discomfort”.

Secondly, fundamentally religious people base their morality on a book of rules, some of which are contradictory, that was written over two thousand years ago – during a time when it was considered a good idea to stone those people whose ideas differed from the mainstream. Some of these rules are good ideas, and others are merely arbitrary, but the religious wish them to be enforced equally – except where they conflict with a churchgoer’s lifestyle. These rules are not interested in understanding, sympathy, or empathy for others. They are not in any way concerned with the reduction of human suffering. The old adage that “suffering is good for the soul” is often embraced – especially if it is someone ELSE’s suffering!

I’ll make a moral judgment now. People like Laurie Higgins, and organizations like Americans for Truth, are morally bankrupt. Placing the question of ethics outside of the realm of empathy and suffering is a morally hypocritical position.