Al Gore won the Nobel Peace Prize today for his work on climate change. His film, “An Inconvenient Truth” won an academy award. Good for Al.

There is some disagreement among the scientifically knowledgeable that Mr. Gore should have received the Nobel. It is thought to be a political statement by the Nobel committee, and the film is known to have a few errors in it, even though the science it is based upon is valid.

But according to the second annual “America’s Report Card on the Environment” survey, most Americans accept the fact of global climate change, and want Bush to do something about it. This survey (PDF link), conducted by the Woods Institute for the Environment at Stanford University in collaboration with the Associated Press, states that:

A striking 84% want a great deal or a lot to be done to help the environment during the next year, by President Bush, the U.S. Congress, American businesses, and/or the American public.

This report says that Americans blame American businesses and Bush’s policies for the declining environment, and that a large majority of Americans are sure that global warming has been, and is currently happening, and that the consequences are likely to be serious.

But there are a few very loud deniers of climate change. I know a couple of religious deniers personally, and if my small sampling of deniers is any indication of the majority, they deny climate change due to religious and/or dogmatic reasons instead of scientific reasons.

The dogmatic, instead of reviewing the science and coming to a conclusion instead start with the conclusion and poke holes in the ongoing climate change science. But even these dogmatic types of skeptic are being overwhelmed with evidence, and are starting to come around.

Christians are having a harder time with climate change, and even though some religious leaders have come around to accepting the evidence, many have not.

The religious group Answers in Genesis advises caution over Global Warming. They lay the majority of the blame on natural events, such as a natural cycle of fluctuating solar output. The belief that nothing happens outside of God’s plan is strong in AIG, and so any talk of climate change that hints at a future global disaster is immediately downplayed, and the blame put on those who are against the “Christian Worldview.” From their article in Answers Magazine, “Human-Caused Global Warming is Slight so far”:

Christians especially need to be cautious when it comes to the issue of global warming and other environmental issues. One of the reasons is that these issues have been hijacked by individuals who desire to change our way of life, and in particular, the Christian worldview that has guided the Western Hemisphere.

The problem with overcoming arguments with deniers is that there is not one single “killer” piece of evidence for climate change that will knock their socks off, demonstrate simply and clearly that climate change is happening, and that it is an Earth-based, rather than Sun initiated phenomenon. Deniers point to past warming, to solar radiation changes, to the Maunder Minimum and the Modern Maximum number of sunspots, and claim that even “if” climate change is happening we can’t prove that it is humankind’s fault. And if it isn’t our fault, then there is nothing we can, or should, do about it.

There would be an easy way to find out if climate change is caused by the sun, or by humans. It is a simple experiment that most freshmen who took physics or chemistry would find familiar. To discover the temperature trends of a substance without actually placing a thermometer in the substance, you instead measure the amount of energy being radiated by that substance. That’s the basic principle behind infrared thermometers.

It is easy to measure the amount of energy that is received by our Earth. We know what the solar energy density is when it reaches the Earth so it is simple to calculate how much of it strikes our planet.

It is also possible to measure how much energy is radiated from the Earth. It would require a satellite aimed at our planet to take a measurement of that radiation, but the tools and science to do so are amazingly simple.

So in a simple experiment, using a satellite, it would be easy to calculate how much energy is radiated, as opposed to how much energy is absorbed by our planet. We could prove, or exclude our Sun as a source of climate change during the first week of this satellite’s operation.

If only we had that satellite.

But we do have that satellite! The Deep Space Climate Observatory, (which was originally named Triana), was proposed in 1988 by Vice President Al Gore. How about that?

The DSCVR was designed to sit at that neutral point between the Earth and the Sun called the L1 Lagrange Point. It contains a radiometer that would take measurements of the sunlight absorbed and reflected by the Earth, and would confirm or deny the Sun’s influence on climate change. It would also be able to measure Earth’s temperature, and show its change.

Here is a wonderful tool that could potentially shut up climate change deniers – or shut up those scientists who are offering proof of climate change. In this game of conflicting talking heads, Triana is the referee and judge who could take a big step toward determining the rightful winner. And it is a tool we might never use. Although NASA built this satellite, it was never launched. 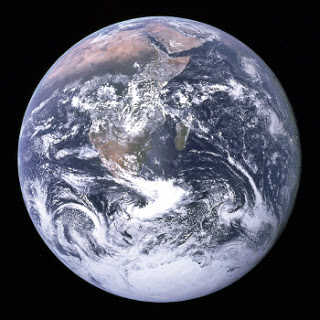 Even though he has a somewhat stilted public persona, I think that Al Gore is at heart a romantic. Although Triana could do real and valuable science, Gore instead emphasized that it would be able to provide real-time video of the Earth to everyone, in the hopes it would draw us Earthlings together in a similar fashion to Apollo 17’s “Blue Marble” photograph. This was derided by Republicans who tried to kill the project and called the satellite a “75 million dollar screen saver”. Scientists and Democrats fought against the satellite’s death, and instead of being killed, the satellite was mothballed.

It is still in storage, at a cost of a million dollars a year. The original team that put it together was disbanded and directed to other projects. It would cost a couple of hundred million dollars to put together a new team, to possibly upgrade the satellite, and to launch it. And that money is a mere pittance when compared to the billions we spend each month in Iraq. Yet we don’t spend that money, and now there are those who deride the satellite and deny its usefulness. A rational person would question this sort of resistance.

When denial becomes this blatant – you have to question motive.